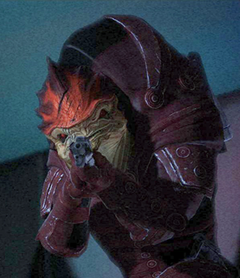 Krogan Battlemasters, (also written Battle Master), are some of the toughest krogan in existence. They are rare because of their biotic abilities and their determination.

The Battle Masters were officers of the krogan military. Tough, disciplined, well-armed, and biotically gifted, a single Battle Master is said to be an equal match to ten soldiers of any other species. Battle Masters regard killing as a science and focus on developing economy of motion which allow them to maximise the advantage gained from their incredible strength in battle; a single blow from a Battle Master is usually enough to kill or severely incapacitate any non-krogan.

Battle Masters hold little regard for the honor that other races often display in combat; they will use any means necessary to achieve their goals, no matter how reprehensible. Hostage-taking and genocide are generally accepted tactics if they ensure that a victory is gained with minimal krogan casualties.

Skarr was a Battlemaster hired by the batarian Edan Had'dah to kill Kahlee Sanders. Skarr managed to track Sanders to Elysium and to the home of her father, retired Admiral Jon Grissom. Skarr burst into the house and was surprised by both a shotgun-wielding Grissom and David Anderson. Skarr appeared to have the upper hand until the Spectre Saren Arterius also entered the fray, at which point Skarr was overwhelmed and fled. When pressed to follow him, Saren declined, claiming that only an idiot would fight a krogan biotic one-on-one.

Skarr was then sent to annihilate a batarian tech corporation, and was told specifically to kill one employee, for whom he mistook another. Skarr would later capture Sanders by killing the Alliance pickup crew sent to evacuate her, a feat which involved shooting down a transport and throwing an APC with his biotics. When Anderson sneaks into an element zero refinery with the aim of rescuing Sanders, Skarr is caught off-guard and killed in a hail of gunfire.

During Commander Shepard's mission to expose Saren, Shepard has the opportunity to recruit Urdnot Wrex, one of the last krogan battlemasters, whom the Shadow Broker has hired to take out the traitor Fist. If Shepard doesn't recruit Wrex before taking on Fist and exposing Saren, then Wrex will be waiting by the elevator to the SSV Normandy. Wrex will ask Shepard if he can join up where Shepard can accept or refuse.

Battlemasters were also used by Saren to defend key areas at his base on Virmire. When Saren attacks the Citadel, he brings along Battlemasters to assist and keep Shepard and the Citadel forces from foiling his plans.

During Shepard's mission to stop the Collectors, multiple Battlemasters are encountered by the squad.

The Chief of Clan Weyrloc, Guld, is a Battlemaster and is attempting to build a new krogan empire by using a salarian to cure the genophage. Mordin asks Shepard for help in preventing this and he explains his involvement with the genophage's redesign.

During Grunt's loyalty mission, the party's activities are opposed by Gatatog Uvenk, the Chief of Clan Gatatog, who holds that Grunt's unnatural birth prevents him from being a true krogan. After completing the mission, Grunt claims that Shepard is his battlemaster.

Krogan Battlemaster Vanguards are among the forces mobilized to help win the war against the Reaper invaders in 2186.

Retrieved from "https://masseffect.fandom.com/wiki/Krogan_Battlemaster?oldid=520754"
Community content is available under CC-BY-SA unless otherwise noted.