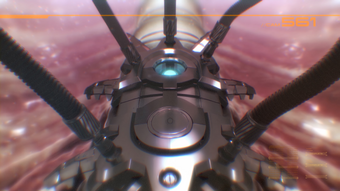 The Lazarus Project was a Cerberus project, the sole purpose of which was to bring Commander Shepard back from the dead.

When Commander Shepard was killed in a Collector attack that also resulted in the destruction of the SSV Normandy, Cerberus was able to recover Shepard's corpse with the help of Liara T'Soni. The Illusive Man created and funded the Lazarus Project, pouring virtually unlimited resources into the belief that only Shepard could stop the Reaper threat to humanity as the Council stood idly by.

The exorbitant project took 2 years and over 4 billion credits to complete. Undertaken by the Lazarus Cell, which was headed by Miranda Lawson and her assistant Wilson, it involved attaching cybernetic implants to reconstruct the Commander's skeleton, reconstruction of the skin, and fluids to restart the blood flow and internal organs. The one thing that the Illusive Man refused to do was implant a control chip in the Commander's brain, fearing that it may affect Shepard's personality and abilities. As part of the project, Shepard underwent facial reconstruction and partially lost prior abilities and talents.

The project proves to be a success in 2185 when Shepard manages to regain full neurological activity.

When there was an attempt to steal Commander Shepard's identity in 2186, the Commander tracked down the person behind the scheme and discovered it was none other than a clone created by Cerberus. The clone was kept a secret, intended to be used for spare organs and other body parts over the course of the true Shepard's revival through the Lazarus Project, but it was never utilized and remained in storage. It was awakened by disillusioned ex-Cerberus operative Maya Brooks six months before the Reaper invasion, and Brooks convinced it to kill and assume the identity of the original Shepard in order to pursue a pro-human agenda. Shepard stopped the clone from escaping the Citadel with the Normandy SR-2. The clone is killed, and Brooks is either captured or killed.

During the assault on Cronos Station near the close of the war against the Reapers, some Project Lazarus records are discovered within the station. They affirm Miranda Lawson's claims that Shepard was reconstructed without genetic or neural tampering per the Illusive Man's wishes.

Retrieved from "https://masseffect.fandom.com/wiki/Lazarus_Project?oldid=453835"
Community content is available under CC-BY-SA unless otherwise noted.