“Organics fear us. We wish to understand, not incite.”

Legion is the name taken by the gestalt consciousness formed by 1,183 geth programs inhabiting a unique geth "mobile platform". The name was chosen at EDI's suggestion. Legion has been searching the galaxy for Commander Shepard ever since the Battle of the Citadel.

Legion is voiced by D.C. Douglas. 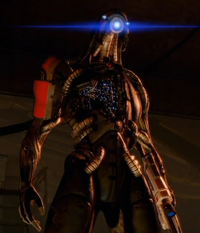 Legion is a unique geth mobile platform, designed to operate outside the Perseus Veil and interact with organics directly. To that purpose, it houses 1,183 geth programs, as opposed to the one hundred in other platforms, enabling it to operate independently and speak. Appearance wise, Legion presented an opportunity to develop the basic geth design by adding moving parts that allowed it to animate with detailed expressions. The flaps on Legion's head serve the same purpose as eyebrows to form expression, raising to imply surprise or interest and folding forward much like the furrowing of the brow to show concentration.

It was created and dispatched following Commander Shepard's destruction of the Old Machine "Nazara", known to the rest of the galaxy as the Reaper Sovereign, investigating several of the worlds Shepard visited — Eden Prime, Therum, Feros, Noveria, Virmire, Ilos, and a dozen uncharted worlds. Eventually it found the Normandy's crash site on the planet Alchera, salvaging a piece of Shepard's N7 armor and incorporating it into itself to repair damage sustained on Eden Prime after being shot by Alliance soldiers. If questioned about specifically using Shepard's N7 armour to repair itself, Legion becomes evasive, first rationalizing with "there was a hole" and then states "no data available" after being pressed, suggesting that it was the result of an irrational action, which goes against the concept that every action the geth do is the result of calculation, unaffected by emotion.

Legion is first encountered while searching for the IFF on the derelict Reaper. It is surprised to find Commander Shepard (to whom it refers as Shepard-Commander) alive, but assists Shepard's team against the husks roaming the dead ship. Eventually, it is knocked out by a husk while opening the way for them to reach the ship's mass effect core. If recovered, it can be sold to Cerberus for research (as intact geth are hard to come by), or brought aboard the Normandy SR-2 and stored under guard in the ship's AI Core. It can then be reactivated for Shepard to interrogate it.

When the geth does not appear to be hostile, it expresses its wish to help Shepard's mission, at which point it will join Shepard's team. When Shepard asks the geth its name, it simply states "Geth". Not satisfied, the Commander rephrases the question until EDI steps in and, referring to the number of programs active in the single mobile platform, quotes a passage from Mark 5:9 in the New Testament — "My name is Legion: for we are many". The geth believes this to be an "appropriate metaphor" and thus becomes known as Legion.

Legion speaks in a straight-forward and robotic fashion, often answering with single words. When using whole sentences its word structure is very organized. Legion regards itself not as a single being, but as a gestalt entity which must achieve consensus to act. Legion expresses admiration for EDI, because unlike the geth who are made up of different processes that rely on each other, EDI handles all the functions on the Normandy by herself, though it also questions how she manages to maintain stability. Legion occasionally expresses its disapproval of how EDI's activities and development are shackled aboard the Normandy.

Legion can, if asked, give more insight into the geth, and often expresses interest in philosophical questions. It also discusses the geth-quarian war, referring to them politely as "creators", which is also how it addresses Tali and some quarians the squad encounter. Legion will, if prompted by Shepard, play back an audio recording from the geth collective memory, in which an early geth haltingly asks its quarian master whether or not it has a soul, an event mentioned by Tali in the original Mass Effect. Legion clarifies that this wasn't the first time a geth had asked the question, but it was the first time it frightened the quarians. 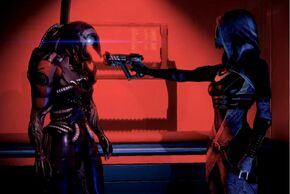 After a while, Legion will inform Shepard that geth are actually apathetic towards organics. Those geth fighting organics are "heretics" following the Reapers or, as they call them, "The Old Machines". Legion will explain that the heretics are developing a virus that will turn all geth into followers of the Reapers and asks you to head to an old, heretic-held quarian space station in order to destroy the virus threatening the peaceful geth. Shepard later discovers this virus could have another purpose: rewriting the hostile heretics to peacefully rejoin the geth.

After both Legion's and Tali's loyalty missions are completed, they confront each other over the quarians' development of anti-geth weapons in preparation for war. Unless a Charm / Intimidate choice is used, one of them will lose their loyalty. Note that if the initial Charm / Intimidate option is greyed out, or if Shepard sides with Tali, there is a Renegade and a Paragon dialogue option that will restore Legion's loyalty and vice versa.

Retrieved from "https://masseffect.fandom.com/wiki/Legion?oldid=172954"
Community content is available under CC-BY-SA unless otherwise noted.