Start a Wiki
watch 01:50
The Loop (Games)
Do you like this video?
This article or section is a stub. You can help Mass Effect Wiki by expanding it. 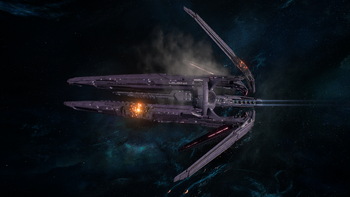 After reaching Andromeda and encountering the kett, Ark Leusinia came under attack by a group of specialized kett hunters known as the Decimation. Stolen kett navigational data allowed the ark to flee through the Scourge while evacuating as many civilians as possible, but constant harrying eventually forced the ark to go into hiding until rescue arrived.

If Pathfinder Ryder follows the trail leading to Leusinia's whereabouts, it is discovered to be heavily damaged from boarding parties of Decimators and without sufficient power to use the main drive. It turns out that a powerful mass effect field generator holding a section of the hull in place is hooked up to Leusinia's power systems, and hasn't been turned off ever since some asari evacuated the ship attempting to get away from the invaders. After a prolonged battle with the kett, the necessary energy is diverted to the drive.

Before the Leusinia can escape, it is intercepted by a Decimator warship, which fires several missiles on a weakened section of the ark. The ship is saved thanks to the biotic powers of asari Pathfinder Sarissa Theris and Cora Harper.

After being escorted to safety, Ark Leusinia is now docked at the Nexus to offload the remaining colonists from stasis and undergo extensive repairs.

Retrieved from "https://masseffect.fandom.com/wiki/Leusinia?oldid=512010"
Community content is available under CC-BY-SA unless otherwise noted.