watch 02:49
The History Of The Leviathans
Do you like this video?
Play Sound 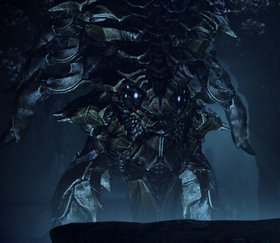 The Leviathans are an ancient aquatic race that dominated the galaxy in the time before the Reapers. Proud and aloof, they regard themselves as the galaxy's first and only apex race, and think of other races as mere tools meant to serve them. With the advent of the Reapers, the Leviathans were forced into hiding to preserve themselves, and were content to observe the Reapers' harvests while surreptitiously erasing any evidence of their existence over the course of hundreds of millions of years. 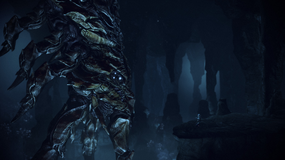 Like the Reapers that were designed after them, the Leviathans are massive in size and possess a resemblance to Earth cuttlefish or squid. Two sets of three eyes are embedded symmetrically on the lower ventral surface of the body. Several tentacle-like appendages extend below the body and from the sides. The Leviathans' exterior is covered in bony, heavily ridged plates. As Leviathans are aquatic, it is believed that they can breathe oxygenated water and their bodies can withstand both the extreme pressure of ocean depths and the lesser pressure of coastal areas. Members of the race have been witnessed at depths of over 3200 meters.

The Leviathans possess the natural ability to influence the behaviors of lesser-minded organisms to the point of complete physical and mental control, an effect that is similar to indoctrination. They can use this ability to communicate with other beings in a manner similar to telepathy, as well as to turn them into thralls. The exact mechanics of this ability are unknown, but it has been compared to the rachni's theorized ability to communicate using an organic quantum entanglement communicator analogue that stimulates neural activity. Over-exertion of this mind-control ability causes nosebleeds in humans, and in extreme cases can lead to brain damage and death.

It is possible that the Leviathans further enhanced themselves cybernetically, allowing them to use element zero to travel through space and breathe air with the use of filtration systems. They might even have modified themselves with biotic amplifiers. In addition, their faster-than-light communication pulses require precise control with technology completely unknown to modern science.

The early history of the Leviathans is completely unknown, but it is speculated by Task Force Aurora that they evolved on an unknown planet that also produced at least one other sapient species. The Leviathans developed the ability to communicate with and dominate land-based sapient species to serve their purposes. 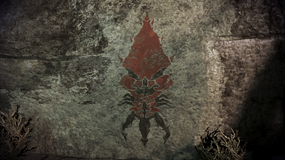 Eventually, the Leviathans utilized this thrall species' civilization to achieve spaceflight and spread throughout the galaxy, despite their immense size and aquatic nature. Every new species they encountered was enthralled to serve them and provide "tribute", and in return, the thralls were cared for and protected. With their dominance assured, Leviathans considered themselves the galaxy's apex race. Over time, however, they observed that their thralls would frequently build synthetic constructs to aid them; these synthetics consistently rebelled, wiping out many thrall species. In response, the Leviathans created an Intelligence with the mandate to preserve life at all costs.

The Leviathans failed to perceive the Intelligence as a threat; they considered it nothing more than another tool to achieve a set goal. As the Intelligence sought out the means to fulfill its mandate, it created an army of pawns that were dispatched to collect genetic data from species throughout the galaxy, much like the Collectors employed by the Reapers in modern times. Eventually, the Intelligence came to the conclusion that the Leviathans themselves were part of the problem, and turned against them. 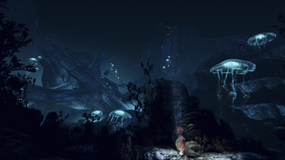 The Intelligence's betrayal of its creators was sudden and devastating. Its pawns slaughtered most of the Leviathans, using their genetic material to create the very first Reaper, Harbinger, who was physically designed after the Leviathans themselves. The surviving Leviathans went into hiding, while the Intelligence used Harbinger to begin the cyclical harvest of the galaxy's species to create more Reapers, all in an effort to solve the problem of preserving life. The Leviathans acknowledge the Intelligence still serves its purpose as a tool, but they believe it has not fulfilled its purpose of preserving life.

As the Leviathans hid, they surreptitiously enthralled subsequent species to erase the remaining evidence of their existence. Resigned to the Reapers' reign, they focused their efforts on ensuring the survival of their species, watching the galaxy through organic "artifacts" for signs of their discovery. Though they had the power to destroy Reapers, demonstrated when they killed the Leviathan of Dis, the Leviathans declined to aid the galaxy's species against the Reapers. 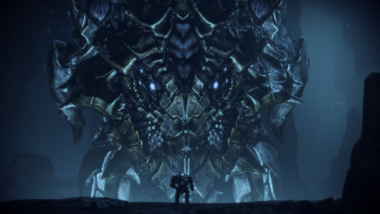 During the Reaper invasion of 2186, a Systems Alliance group known as Task Force Aurora began to threaten the Leviathans with discovery. Dr. Garret Bryson, the head of the task force, took interest in the Leviathan of Dis and surmised that whatever could kill a Reaper might be an advantage in the present war. Under orders from Admiral Hackett, Aurora began investigating incidents and patterns that might lead to this Reaper-killer, the "true Leviathan of Dis".

Bryson pursued several leads, including sightings of mysterious creatures around the galaxy, sites that might be frequented to gather element zero for space travel, and the activity of the Reapers as they seemingly carried out their own hunt for Leviathans. Aurora members Dr. Alex Garneau and Dr. Ann Bryson were dispatched to nexuses of these data sets, Mahavid and Namakli, to search for artifacts related to Leviathan and pick up its trail.

At Admiral Hackett's request, Commander Shepard meets with Dr. Garret Bryson in his lab to assist in his research. The Leviathans took control of Bryson's assistant Derek Hadley through an unshielded artifact in the lab, shooting the doctor and killing him before he reveals anything significant in an effort to dissuade the search. Shepard is undeterred and continues the scientist's work, shielding the artifact to prevent further mishaps, and determines Garneau's location through careful investigation.

On Mahavid, the Leviathans enthralled the whole population of T-GES Mineral Works staff stationed there, directing them to study an assortment of sciences beyond their normal scope of simple tungsten mining: evolutionary implications of human biotics, plant cross-breeding, turian pain threshold, global starvation estimates, and even colony disappearances. Shepard arrives on the asteroid to find the miners doing anything but mining, and soon enough, the Leviathans present a man claiming to be Dr. Garneau to the Commander.

Through Dr. Garneau, the Leviathans reiterate their earlier warning to Shepard: Turn back. The darkness cannot be breached. Garneau bolts from Shepard, leading to a chase made more complicated with the arrival of Reaper forces. Shepard catches up to Garneau in the mines, near a spherical artifact identical to the one that took control over Hadley back at the Citadel. With husks close on his heels, Garneau detonates an explosive powerful enough to destroy the husks, the artifact, and himself.

With the enthrallment link gone, the Reapers begin retreating and the miners begin acting like themselves again, only to have no recollection of previous events and learning that the Leviathans held them in thrall for at least ten years. Shepard and company learn that the "Garneau" they were chasing was fake, and the real Dr. Garneau's body is found later near the artifact. The corpse contained encrypted data and 8 missed calls from Ann Bryson, Shepard's next link in the investigation. 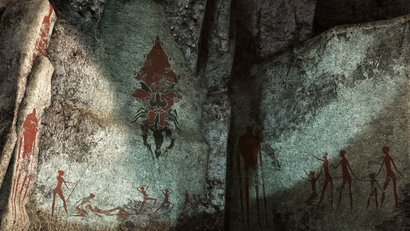 By the time of Shepard's arrival, Reaper forces have already begun assaulting Namakli in search of the Leviathans' trail. Ann Bryson is rescued, although Marauders have already begun accessing yet another Leviathan artifact found on the planet. The Leviathans once more attempt to dissuade Shepard from the search by enthralling Bryson, causing the Commander to destroy the artifact.

Left with few other options, Shepard and company resort to using the artifact in Dr. Bryson's lab, with Ann serving as the bait, in an attempt to trace Leviathan communication signals. The artifact's shielding is briefly let down, leading Ann to be briefly enthralled while EDI traces the signal. The operation is successful and Shepard eventually arrives at the source of Leviathan signals: 2181 Despoina.

There, Shepard dives to the Leviathans' lair deep under the planet's ocean and meets a Leviathan, who uses its powers to isolate them both within Shepard's mind. Projecting itself as multiple people enthralled during Shepard's investigation, the Leviathan explains its race's history and connection to the Reapers.

Initially, the Leviathans refuse to help Shepard, justifying this skepticism with the fact none have defeated the Reapers before; they decide to allow the cycle to continue as planned, keeping the Commander as their servant while the Reapers harvest the galaxy as they have always done, but Shepard points out that the Reapers now know of their existence and that the Leviathans can no longer afford to remain in isolation. 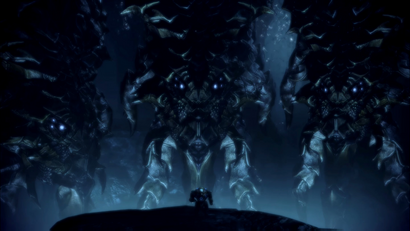 Realizing that the Reapers fear Shepard for defeating Sovereign and the Collectors, other Leviathans reveal themselves. Together, they agree to aid the galaxy in the war against the Reapers because they still consider themselves the galaxy's apex race, not out of a desire to help "lesser species." The Reapers will pay their tribute in blood, and the Leviathans swear to make slaves out of any Reaper daring to trespass on their domain. As Shepard departs the planet, the Leviathans turn a Brute against other husks and use their artifacts to transmit a powerful pulse that disables an attacking Reaper Capital Ship, illustrating their power.

During the war, the Leviathans are able to sever the Reapers' control over a group of Collectors. These "awakened" Collectors subsequently join the fight against the Reapers to avenge the Protheans. With assistance from spec-ops soldiers, Leviathan artifacts are also deployed behind enemy lines, allowing them to subvert Reaper forces to their will. During the final battle over Earth, Shepard can inform the Intelligence that its creators have joined the war, to which it responds they are welcome to, as it is only carrying out their commands.

Virtually nothing was known of the Leviathans before Commander Shepard's encounter with them. No record of the Leviathans' true name exists, no ruins are attributed to their civilization, and no influence on other races has been recorded. The only traces of their existence known to remain are ancient rock paintings depicting them on Namakli and numerous mysterious "artifacts" scattered across the galaxy. The Leviathans refer to these artifacts as "fragments". 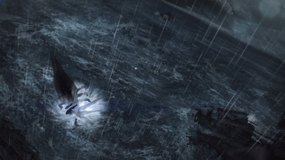 Technologically, the Leviathans claim and are believed to be extremely advanced, even more so than the Reapers. They have the capacity to direct faster-than-light communication pulses via a method unknown to modern science and created many organic, opalescent "artifacts" through which they can communicate, control thralls, and observe the galaxy. The Leviathans' ability to develop and use organic tools has been compared to the Thorian, which similarly evolved to eschew the conventional technology depended on by other sapient species.

Retrieved from "https://masseffect.fandom.com/wiki/Leviathan?oldid=525956"
Community content is available under CC-BY-SA unless otherwise noted.