View source
watch 02:59
Wiki Targeted (Games)
Do you like this video?
Play Sound
This article or section is a stub. You can help Mass Effect Wiki by expanding it.

Mass Effect: Andromeda
“I believed in a new beginning. Still do. I have to. We're in it.”

Liam Kosta is a security and response specialist with civilian tactical training. Always upbeat and optimistic about challenging things, Liam wears his heart on his sleeve and says what he means be it for good or ill.

He lends his voice to the Andromeda Initiative orientation briefing regarding weapons and biotics.[1]

Liam is a potential romantic interest for the female Ryder.

Liam's screening interview states that he was born on Earth, but his parents specialized interplanetary policy law, and the family moved frequently. Their primary residence was split between London and the Citadel.

Liam entered university for engineering but left to train for law enforcement. After a brief stint as a police officer at Bradbury Landing on Mars, Liam later transitioned to the multi-species effort of Heavy Urban Search and Crisis Response. The human contingent—Heavy Urban Search-Terrain 1 (nicknamed "HUSTL")— reported that Liam performed exceptionally in all conditions.

His multi-disciplinary skills set him apart, and Liam was hand-picked by Alec Ryder to support the Pathfinder team.

Liam is one of the personnel awakened during the initial moments of Hyperion's arrival in Andromeda, attended to by Dr. Harry Carlyle. When the ark collides with a spatial phenomenon above Habitat 7, Liam accompanies Pathfinder Alec Ryder and one of his children down on the planet to investigate its viability as a refuge.

A shuttle mishap separates Liam and Ryder Jr. from the main Pathfinder team, granting an opportunity for the younger Ryder to learn a few things about Liam. They eventually link up with the rest of the team, but not before encountering hostile aliens and strange advanced buildings. Later events result in Alec's death and his offspring's incapacitation, and Liam helps rush the younger Ryder to Hyperion for medical treatment.

When Ryder Jr. is brought to the SAM Node, Liam keeps vigil by their side until the former regains consciousness, notifying Cora Harper and Dr. Lexi T'Perro when it happens. He couldn't speak when Ryder asks about their father, leaving Cora to break the news, and Liam puts a hand on her shoulder in commiseration. Having seen the younger Ryder's field prowess earlier, Liam thinks they're qualified to succeed their father as Pathfinder. As the three of them leave to give Pathfinder Ryder some time to rest, Liam belatedly informs them their sibling's still comatose though he believes they can also pull through.

Later, when Ryder obtains command of the Tempest, Liam claims Deck 3 Storage as his personal quarters and brings in his meager belongings, among them a worn-in couch.

Further interactions with Liam reveal that he had an ideal life back at the Milky Way galaxy but joined the Andromeda Initiative because he was enamored by its mission of exploration and new beginnings. Liam strives to make the Heleus Cluster hospitable for the Initiative settlers and gain the acceptance of the native angara on behalf of the Andromeda Initiative. Much to Liam's frustration however, Liam's efforts to foster cooperation between the two groups is met with resistance as both groups still harbor a distrust of one another.

After learning about kett exaltation, Liam comms angaran squadmate Jaal Ama Darav to ask about his opinion on the facility dedicated to it on Voeld. As Jaal isn't in the mood, Liam empathizes and halfheartedly offers "inane chatter about nothing" to change the subject.

Later, he comments on the Moshae, claiming her toughness reminds him of his mum. She's not the heart of their community, nor did she ever have to stand against a phalanx of kett, but she did put up with Liam. Jaal dryly notes heroic efforts are all around, causing Liam to chuckle and call him a dick. 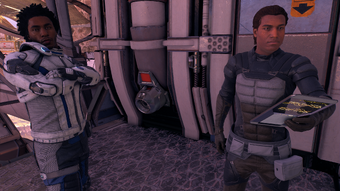 During first visit to Kadara, Liam negotiates at Kadara Port's docks for parking space for the Nomad. Having worked with disaster profiteers back in the Milky Way, he's confident he can bribe the relevant personalities and he encourages the Pathfinder to focus on the mission at hand.

Once the cluster-shaking upheavals have settled down with most adversaries defeated and worlds settled, Liam muses the Tempest crew can do basically anything afterward. Cora suggests relaxing on a beach, and Liam considers it since the cluster-wide terraforming may have made some. Jaal quips the angara would be willing to share some spots, prompting Liam to declare it's time for some beach volleyball. Lexi cautions against using jump-jets, however.

Liam admits to Ryder that his unsanctioned efforts to barter for angaran survival strategies on behalf of the Andromeda Initiative has led him to a dangerous predicament. Liam's contact in the angara, Verand, and her group has suddenly gone missing and Liam asks Ryder for help with her rescue. He says he was trying to help the Initiative people adapt to their new home, so he gave Verand the Nexus' navpoints and data in the hopes that she can modify their data and technology to better serve the Initiative. If pirates have taken her and interrogate her, or give her to the kett, the Initiative could be jeopardized. He has also asked August Bradley from Prodromos for help.

Liam's lead from a trader led them to a kett ship in the midst of a debris field. After engaging with the raiders in the ship, further investigation reveals that the kett ship was salvaged by a group of angaran pirates called Talon Wings and they have been using it for their piracy operations. The pirate leader, Calot, discovers the Pathfinder's rescue team and orders his raiders to enslave them. The Pathfinder team fights its way to the Cargo Bay exit, where Liam notices some of Verand's things. The exit door is locked, making Liam frustrated and lose his temper. Using the console to open the door brings up Calot. The conversation ends with Calot venting the cargo bay and trying to suck the team into space.

Fortunately, August Bradley arrives with a squadron of engineers and they hack the ship. Bradley's team seals the doors but causes a power surge on the ship, shifting artificial gravity. Calot is furious. Ryder's team goes searching for the captives, while Bradley's engineers work on a fix for the gravitation. Ryder uses SAM to scan the ship's control hub so Bradley's crew can lift the lockdown on the ship. Accessing the consoles gives Bradley's engineers control of the ship's security. Security camera feeds reveal that the raiders not only took Verand's group captive, but human Initiative members as well. The Pathfinder team fight their way through raiders to free the captives. While Bradley's team evacuates the captives, the Pathfinder team confront and defeat Calot.

After escaping the ship, Bradley briefs Ryder that the kett ship's reactors have leaked, and that the ship is fully irradiated. Verand appears on screen to express her gratitude to Liam and Ryder. Ryder can choose to detain Verand's group until the Nexus updates their specs or allow them to travel back to Prodromos with Bradley's group unimpeded. Liam and Ryder have a discussion about the symbolic meaning of their rescue mission to the angara and watches as the kett ship blows up.

Note: †Rank 6 of each Skill is unavailable to Liam until his loyalty mission Liam Kosta: All In is completed.

Liam is armed with dual overclocked Omni-Blades as well as the Charger for ranged battles.

A male Ryder can flirt with Liam, but when directly asked he turns it down as he's not into guys. He's flattered though, and he's curious if he reads as a one-night fling or marriage material. If the former, Liam chuckles some guy's bound to get lucky with Ryder someday. If the latter, Liam shares he got that a lot, and his mother thought his hair had something to do with it.

Liam is a romance option for the female Ryder, and she can begin flirting with him early on. Following the Eos vault's activation, Liam confides in Ryder his frustration about all the disparate factions treating each other like outsiders instead of coming together. Liam shows Ryder a picture of a British petroleum operated car that his family used to fix up together. He shares with Ryder that his family and friends from HUSTL arranged for a transport ship to send the car to Andromeda. Though it is unlikely Liam will ever see it, he is content in knowing that it is on its way.

After sharing this tender moment, it's possible to have a "one night stand" with Liam. Committing to other relationships afterwards, however, will cut off any chance of further developing a romance with him.

After completing his loyalty mission, Liam arranged for a soccer game for the Initiative members and the angarans on Eos. Liam said HUSTL would start games like this in refugee camps and though he didn't "get it" then, he now understands that he didn't need to try so hard to force people to get together and that small gestures like these are also important when building bridges. Liam would then end the conversation by discussing the status of their relationship. Ryder can reaffirm her desire for a committed relationship but doesn't want to be put on a pedestal as "the Pathfinder" or keep the relationship casual. The soccer ball is kicked to them and the two can participate in the game or sneak off to be alone together.

Sometime later, Liam sets up a date on Eos. Having modified their jump jets, Liam wants to make a couple free fall jump from a high ridge as a way to commemorate the free fall jump they made the day they met on Habitat 7. Although their mission ended in tragedy, Liam hopes this free fall jump will make Ryder think of happier times. After completing the jump, Liam shows Ryder the heart-shaped cloud he arranged to be made on the sky. Ryder and Liam end their date fooling around on the ground.

Ryder will end up snuggled on Liam's shoulder during the Tempest's Movie Night.

When Ryder returns to the ship before storming Meridian, Liam will request for her to meet him on the bridge for a brief talk before continuing with the mission. He has romance-specific dialogue in the aftermath, where Liam expresses a desire to marry Ryder.

Received after visiting Aya for the first time (?):

Received after completing A Dying Planet: