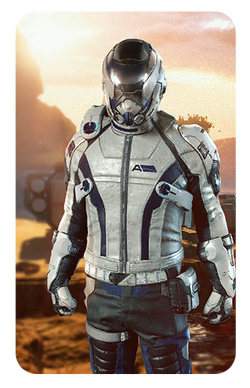 Liam thinks it's time for something "familiar," like a day out on Aya. He also mentioned "getting your eyes on something," but wasn't specific about what he meant.

Prerequisite: A Trail of Hope

This mission is obtained while on board the Tempest after completing the prompted conversation with Liam about what he brought to Andromeda.

Talking to Liam onboard the Tempest will prompt another conversation with Pathfinder Ryder that they need some down time on Aya and this mission will be added.

Talk to Liam at the Tavetaan on Aya Edit

Head to The Tavetaan on Aya to speak with Liam at the bar. Talking to Liam, he will ask you to look around and scan supplies that could be useful. He advises taking a stroll around the Marketplace.

Head to the Marketplace and scan the General Goods Market Stall.

When scanning the supplies belonging to Xaan Ingil, however, a security guard will prevent Ryder from acquiring the data from the scan, prompting Liam to express his frustration over the comm and asking you to come back to the Tavetaan.

Talk to Liam at the Tavetaan Edit

Speaking to Liam again in the Tavetaan prompts a conversation seemingly requiring discretion, as to which Ryder expresses confusion in regards to the situation. Liam then explains that the scans were used as an attempt to find data provided by Verand that would help food yields at Andromeda Initiative Outposts, but he called them off to avoid conflict. He also reveals that he wanted to obtain angaran methods of survival, and how he was blocked by them and the Nexus when wanting to share information.

You can then either say it's not a big deal or express frustration at being blindsided towards Liam's actions, which yields the response that he didn't intend to get either side angry and that he doesn't blame them. The conversation then ends with Ryder and Liam agreeing to leave the marketplace alone and to not push their luck, thus concluding the mission.

Retrieved from "https://masseffect.fandom.com/wiki/Liam_Kosta:_Day_out_on_Aya?oldid=515503"
Community content is available under CC-BY-SA unless otherwise noted.