“You were marked by the beacon on Eden Prime — you were touched by working Prothean technology. That is why I find you so fascinating.”

Dr. Liara T'Soni is an asari researcher who has spent the past fifty years of her life studying Prothean technology and culture, specialising in the Prothean extinction. She was born in 2077, making her "only" 106 — little more than a child in asari terms — when Mass Effect takes place. She already has a great deal of insight into the Protheans and is a highly trained user of biotics. She is a potential romance interest for either a male or female Shepard.

Liara T'Soni is voiced by Ali Hillis and her face is modelled after American actress Jillian Murray.

Note: There is a bug affecting Liara's character on all platforms (PC, Xbox 360) that remains unpatched as of PC version 1.02. If you unlock all of Liara's biotic talents, it will cause the tech ability Overload to be unavailable for the player to use in the HUD screen/Power Wheel. The only way Liara can then use Overload is if the Squad Power Usage option is set to Active.

After learning Liara is Matriarch Benezia's daughter, Commander Shepard searches for Liara to discover what, if anything, she knows. Searching the Artemis Tau cluster, Shepard eventually discovers her suspended in an energy field at a dig site on Therum, a mining world in the Knossos system. The geth have chased her behind the barrier curtains, in an attempt to either kill Liara or force her to help Saren Arterius find the Conduit. After being rescued from the doomed ruins, Liara joins the Normandy and is subsequently available as a squad member. She uses her telepathic abilities to assist in interpreting Shepard's fragmented visions gained from the Prothean Beacons, in order to discover and thwart Saren's plan in time. She was surprised by Shepard's revelation of the Protheans' extinction by the Reapers, but believed it to be true, as there was remarkably little evidence of the Protheans' existence — as if something or someone did not want the mystery of their extinction solved.

Liara does not relish her role as Benezia's daughter and has shied away from her mother's life as an important figure in galactic affairs. Benezia's position meant Liara faced high expectations from everyone, and she chose a career in archaeology to escape the pressures of being the daughter of such a prominent figure. Because of her work, Liara spends most of her time alone. She is shy and not used to lying, a trait Ashley Williams is tempted to take advantage of — "Want me to ask about her sex life? Might be illuminating."

Liara is viewed with suspicion by the rest of the Normandy's crew because of her connection to Benezia, though she has not spoken to the matriarch in many years. However, she knows her mother well enough to be astonished to discover she is working with Saren, and does not believe she could be aiding him of her own free will. Shepard can talk to Liara about her mother and discuss the reasons Benezia may had for assisting Saren, as well as asari culture in general and the misconceptions surrounding Liara's species.

Liara later explains she is unaware of whom Benezia chose as her partner, only knowing that her 'second parent' was another asari. Reproduction between two asari is taboo in asari culture, which may contribute to Liara behaving as an outcast from society; it is speculated that her 'father' did not wish to be identified due to the social stigma surrounding 'pureblooded' offspring. Whatever the reason, Benezia never reveals the identity of her partner to Liara — whether this is important enough to be explored further in the future is unclear. As a result, Benezia raised Liara alone, though this is not unusual among asari due to their long lifespan. From an early age Liara became fascinated in the Protheans, seeing them as wondrous, mysterious figures.

Liara was initially drawn to Shepard because the Commander was touched by Prothean technology on Eden Prime. Unfortunately, Liara is used to being alone for long periods of time, and confesses that she always seems to say something embarrassing around other people. When Shepard jokes about Liara sounding like she wants to dissect Shepard in a lab, Liara becomes flustered and claims she only meant Shepard would make an interesting specimen for an in-depth study, further embarrassing herself. Liara discreetly looks up Shepard's service history to learn more, worrying about making a fool of herself if she asks the Commander directly. Her scientific interest gradually becomes a romantic attraction that Shepard can choose to pursue. 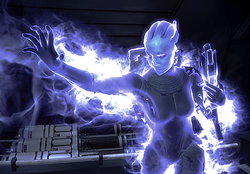 Even if Shepard has other romantic interests, Liara still cares about the Commander, sympathetic to the nightmares Shepard suffers because of the visions from the beacon. Liara is very compassionate — she even feels sorry for Saren because he is losing his mind to indoctrination. If she is present during the Noveria mission, she will always counsel forgiveness and advise Shepard to release the Rachni Queen. However, she is used to defending herself on remote digs — sites are often raided by privateers for artifacts — and in combat, she makes a formidable ally due to her near-complete focus on biotics.

If Liara accompanies Shepard to Ilos, she, unlike the other squad members, finds the planet fascinating rather than unnerving, given her interest in the Protheans. She never expected to set foot on Ilos, and hopes to return after Saren has been dealt with. She becomes very excited once they descend into the bunker, wondering what secrets are hidden inside — resulting in the other squad member reminding her that they are there to stop Saren and that she can save the sightseeing for later. After Vigil has given his message to Shepard, Liara wants to stay and talk to the VI a little longer, saying this might be their only chance to learn what Vigil can tell them about the Protheans. Shepard can offer an opinion on Liara's sense of priority.

“There's something compelling about you, Shepard.”

If Shepard begins a relationship with Liara, she eventually reveals she has never melded before and finds the idea a little daunting, but gradually comes to trust the Commander, feeling as if they share some special connection. During the Normandy's lockdown, she comes to Shepard's side to reassure the Commander, and they almost share a kiss before being interrupted by Joker.

When the Normandy escapes and en route to Ilos, Liara comes to see Shepard, claiming she wants to spend the night, afraid she might never see Shepard again but certain this is what she wants.

During the mission on Noveria, Gianna Parasini mentions to Shepard that Matriarch Benezia is visiting Peak 15. If Liara has been recruited but is not present, a squad member will suggest that Shepard bring her to confront or possibly talk her mother around. However, doing so could easily jeopardize any attempted companion achievements. If Liara comes along, there will be additional dialogue throughout the mission. Upon regaining her true self, the Matriarch confides that she had always been very proud of Liara, calling her "Little Wing" before expiring. Liara mourns for her mother, but takes some comfort from the fact Benezia tried to stop Saren, no matter how the attempt turns out. She chooses to remember Benezia as she once was. 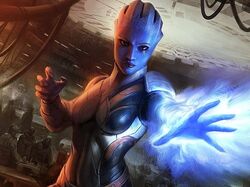 Two turian brothers and a batarian, heading towards Omega, are discussing their asari passenger, and comment it's been a month since the destruction of the Normandy and the disappearance of Commander Shepard. When their passenger, revealed to be Liara, asks if they're close to the station, they refuse to let her leave and suggestively demand additional "docking fees". Disgusted, she refuses and uses her biotics to incapacitate them. Liara then docks the ship herself, telling the landing staff that her visit is both business and personal, and that she has "someone to meet".

Later, in the Afterlife Club on Omega, Liara is speaking with an elcor patron about Shepard's whereabouts, only to be told they have not seen "...anyone like that here — nor have I been looking". The two are commenting on a news broadcast that reports the Citadel is still under reconstruction when they are interrupted by a mysterious hooded figure, who is revealed to be a drell. Liara recognises him as her contact, and asks for information on Shepard. The drell agrees to inform her, but only once they are outside. The drell, known as Feron, informs Liara that Shepard is dead. Liara is shocked and asks Feron to see the body when they are attacked by Blue Sun mercenaries. The Blue Sun mercenaries are attacked by Cerberus operatives and Liara and Feron manage to escape only to be captured by Cerberus, where they meet Miranda Lawson. Liara meets with the Illusive Man to discuss Cerberus's motives; Shepard represents humanity and Cerberus wants his body back in human hands. The Collectors have hired the Shadow Broker who in turn, hired the Blue Sun mercenaries to retrieve Shepard's body as well. The Illusive Man tasks Liara to find out precisely why the Collectors want Shepard's body. Liara agrees, but for Shepard, not Cerberus.

Two years after the events of Mass Effect, Shepard meets Liara upon reaching Illium, and discovers that she has become an information broker. She is unable to talk to the Commander freely since all of her conversations are probably being recorded on Illium. Liara's personality has become much darker and ruthless, showing willingness to break the law and to threaten people in order to achieve success in the information trade. She is even heard quoting her mother, Matriarch Benezia, when threatening a contact. Her change in personality is later revealed to be attributed to her hatred of the Shadow Broker and her determination to end him for the grief the Broker put her through. After certain dialogue choices, it is possible to break through her shell and see the real Liara, but only for a moment. When asked about her needs, Shepard will offer to track down the Shadow Broker's agent known as the Observer. She is also willing to provide the Commander with information on the locations of some of the potential mission recruits.

If she was Shepard's romantic partner in Mass Effect, she is seen on the SSV Normandy as it is attacked by an unknown assailant. On Shepard's orders to evacuate, she climbs into an escape pod before the Normandy is destroyed. After Commander Shepard is resurrected through the Lazarus Project, the Illusive Man tells the Commander that Liara is probably working for the Shadow Broker and, if so, she is not to be trusted.

During their first meeting on Illium, she greets Shepard with a kiss. After that, Liara confesses that she feels guilty — she understood that Cerberus would use Shepard for their own agenda, but nevertheless gave the Commander's body to the Illusive Man, because she could not let Shepard go. Shepard may choose to calm her by assuring that she did the right thing as the current mission is extremely important. After handing over Shepard's body, Liara remained on Illium, devoted to hunt the Shadow Broker down, although she expresses regret that she cannot come with Shepard. On-board the Normandy SR-2, the Commander will have a picture of her near the private terminal in Shepard's quarters. If Shepard remains faithful to their relationship, the Commander will look, smiling, at Liara's picture during the journey to the Omega 4 relay.

Lair of the Shadow Broker

Retrieved from "https://masseffect.fandom.com/wiki/Liara_T%27Soni?oldid=146929"
Community content is available under CC-BY-SA unless otherwise noted.