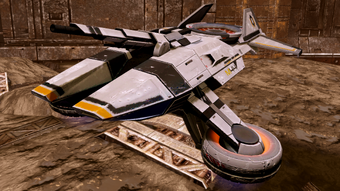 The M-44 Hammerhead is an infantry fighting vehicle that hovers over the battlefield at up to 120 kilometers an hour. It most likely follows a theme of naming armored vehicles after sharks, just like the M35 Mako.

The Hammerhead can seat at least three crew members at a time. It incorporates an onboard VI system that monitors the environment for dangers and alerts the crew. An integrated mineral collection system allows the Hammerhead to retrieve any resources it finds during a mission. Like the Mako, it is capable of being air-dropped from a frigate and of propelling itself vertically to scale obstacles by means of hoverjets. But continuous exertion of the Hammerhead's hoverjets will overheat them, rendering them useful only for short hops. The Hammerhead also incorporates a boost feature that allows the vehicle to move quickly across the battlefield. If the boost and hoverjets are used simultaneously, the hoverjets will overheat quicker and not cool until the boost is released.

The Hammerhead is armed with a single gun which can only swivel vertically, but it compensates for this by boasting a fairly high rate of fire and a guided missile system that ensures accuracy even during aggressive maneuvering. Despite its formidable weaponry and design, the vehicle lacks onboard kinetic barriers, making it vulnerable to sustained enemy fire. This problem is somewhat mitigated by the Hammerhead's sophisticated repair system which automatically restores the vehicle's integrity (health) if no damage is taken for a brief period of time. Nevertheless, the Hammerhead's vulnerability forces its driver to maneuver constantly out of the line of fire in order to prevent major damage.

Commander Shepard can obtain a Hammerhead from Zeona. It can prove useful in exploring hostile terrain where elusive Cerberus scientists Dr. Cayce and Dr. O'Loy have attempted to uncover Prothean artifacts.

The Hammerhead apparently has a transport variant, with the cannon removed, and capable of moving underwater by tilting its hoverjets opposite its destination. One such vehicle was used by Liara T'Soni and Quoyle to travel to a Prothean site beneath Kahje's oceans, although it was crippled by Cerberus forces already at the site. It had escape pods at the back of the vehicle.

The M-44 Hammerhead is absent from the Normandy in 2186. Steve Cortez explains that the Hammerhead was taken to a lab on Earth to improve its weak armor plating, but the refit was not completed before the Reaper invasion. Cortez suggests that the lab and the Hammerhead were most likely destroyed.