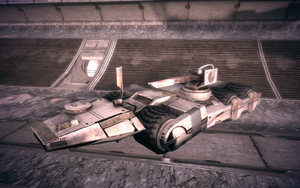 The M29 "Grizzly" Infantry Fighting Vehicle (IFV) was the standard "battle taxi" of Systems Alliance Marines for nearly thirty years. However, while excellent in long-term planetary campaigns, the Grizzly's bulk and weight made it unsuitable for rapid deployment across the Alliance's expanding sphere of influence. To fill this increasingly important role, the M35 "Mako" IFV was designed to fit in the small cargo bays of Alliance scouting frigates. The M35's small size and low weight allow it to be easily deployed to virtually any world.

The military-grade Grizzly can be equipped with either an antenna/turret package, or an antenna, minus turret, package. The oldest recorded use of the Grizzly was a turret-less variant used in a skirmish of the First Contact War. This skirmish was recreated as a simulation at the Pinnacle Station. These Grizzlies were painted in the white paint typical of Alliance Navy vehicles.

With the success of the Grizzlies, the civilian-grade VT7 was introduced minus the antenna and turret. The VT7s were painted brown with orange highlights.

The military-grade variants were used by the Systems Alliance and corporations tasked with the security (ERCS) and colonization (ExoGeni Corporation) of planets. The Alliance will occasionally ship these vehicles to warlords for their cooperation and assistance in handling local security issues. For example, the Alliance delivered two fully equipped M29s to Lord Darius on Nonuel for use against the batarians in the Skyllian Verge. Even less common, these variants will find their way into mercenary groups like the one on Presrop.

The civilian-grade variants were used by biotic cultists, mercenaries, scavengers, and "wild-cat" miners. A VT7 was used as well by a survey team from Exogeni Corporation on Trebin.

Grizzlies can be found on various uncharted worlds, usually parked next to outposts (possibly as a rudimentary power source), discovered as wreckage, abandoned in their garages or stripped of necessary supplies. There are seven of these vehicles on Feros – including two that have crashed into the tunnels and several on the Prothean Skyway – and several on Noveria along the Aleutsk Valley that have been destroyed by the geth (and, in one case, actually crashed into Peak 15's garage door).

Retrieved from "https://masseffect.fandom.com/wiki/M29_Grizzly?oldid=467965"
Community content is available under CC-BY-SA unless otherwise noted.