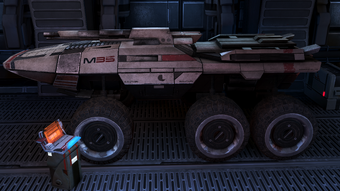 The M35 Mako Infantry Fighting Vehicle was designed for the Systems Alliance's frigates. It is designed to fulfill the role of rapid deployment that its predecessor, the M29 Grizzly, fell short of accomplishing. Though the interior is cramped, an M35 is small enough to be carried in the cargo bay and easily deployed on virtually any world.

With its turreted 155mm mass accelerator cannon and coaxial-mounted machine gun, the Mako can provide a fireteam with weapon support as well as mobility. Since Alliance marines may be required to fight on any world in a variety of planetary environments, the Mako is environmentally sealed and powered by a hydrogen-oxygen fuel cell.[1]

The vehicle's armor is tough enough to withstand high drops, extreme heat and cold and rough terrain. The Mako's suspension and propulsion system allow the vehicle to adapt to various terrain, as well as enabling the vehicle to change direction quickly via independently reversible wheels (similar to a tank). 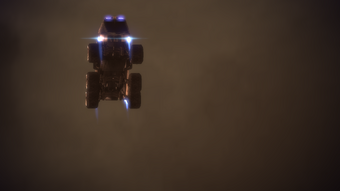 For deployment on low-gravity planetoids, it is equipped with micro-thrusters and a small element zero core, which can be used to increase mass and provide greater traction. While not large enough to nullify the vehicle's mass, the core can reduce it enough to be safely air-dropped (a maneuver normally requiring a minimum of 100m of open terrain). This allows frigates to deploy their shore parties while limiting the ship's exposure to defensive anti-aircraft artillery. When used in conjunction with thrusters, it also allows the Mako to extricate itself from difficult terrain.

The Mako's hull is covered with laser detection arrays, which forewarn the crew of enemy laser-guided ordnance. Ground-penetrating radar allows detection of anti-vehicle mines and other subsurface anomalies. These will be brought to the attention of the crew by the vehicle's micro-frame computer system.

Several combat support vehicles using the Mako's basic chassis are manufactured for Alliance surface garrisons. These include a recon drone controller, a mobile air defense platform, and the M38 military ambulance nicknamed "Moby" because it is painted white during peacekeeping operations. Shipboard Marines exclusively use the tactically flexible and heavily armed base model.

The SSV Normandy carries a Mako, which is used as a land vehicle. Commander Shepard uses the vehicle explore most of the planets the squad lands on.

Notably, Shepard's squad uses the Mako on Ilos to travel through the Conduit. The Mako was teleported instantaneously to the Citadel, where it smashes over two geth troopers before finally coming to rest on its side. It is overturned and severely damaged in the landing, so Shepard's squad is forced to abandon it and fight on foot.

Sometime after the battle, the Mako was repaired or replaced.

When a Collector Cruiser destroys the SSV Normandy in a surprise attack, the wreckage crashes on the surface of Alchera. The Mako can be found at the crash site, partially encased in ice and rock but otherwise almost completely intact, demonstrating the vehicle's legendary resilience and prompting Shepard to have a flashback of the vehicle parked inside the Normandy's cargo bay.

Following the construction of the SSV Normandy's successor, the Normandy SR-2, the UT-47 Kodiak Drop Shuttle supplants the Mako as Shepard's primary transport to and from combat missions.

Numerous Makos are deployed groundside during the final battle for Earth, where they form the bulk of the Alliance mobile armor under Hammer Team. At the push toward the London Conduit, several vehicles try to outrun Harbinger's attacks, only to fail utterly. One Mako directly sidelines Shepard's squadmates after tumbling on their path, forcing Shepard to proceed alone. 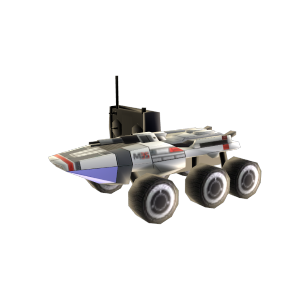