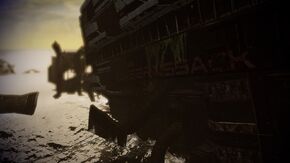 The MSV Hugo Gernsback (registry BW4610034087) was a privately held frigate under the command of Captain Harris Fairchild and his first officer Ronald Taylor. Built off-world, the Gernsback was not rated for suborbital descent.

In 2175, the Gernsback was sent on a survey mission to the recently discovered planet 2175 Aeia. While on approach to the planet, the Gernsback was impacted by an unspecified impactor, resulting in damage to its sublight drive. The Gernsback was unable to control its descent and forcibly crash-lands on the surface of Aeia. Some of the crew, including the captain, were killed. Ronald Taylor was promoted to acting captain.

Ten years later, Ronald Taylor's son Jacob obtains the location of the crash through Cerberus channels. He may pass along this information to Commander Shepard, who then has the discretion to investigate the matter.