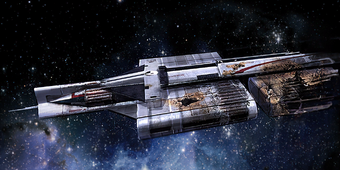 The Worthington is a Kowloon Class modular conveyor of human design, configured for mixed freight and passenger hauling. The ship appears to be in shut down state; the main thrusters are cold, and it is adrift off the orbit of Antiroprus.

The Worthington had at least four crew members - the captain, a doctor named Smith, and two other crewmen, Jacob and his biotic girlfriend Julia - though the crew quarters have room for more than twenty.

Commander Shepard's team finds the Worthington apparently deserted and heavily booby-trapped, with Jacob hooked up to life support in the medical room, though his brain activity is flat-lined. Shepard can read the crew logs in the medical room, crew quarters and cockpit to piece together what happened there.

Retrieved from "https://masseffect.fandom.com/wiki/MSV_Worthington?oldid=470387"
Community content is available under CC-BY-SA unless otherwise noted.