Maelon Heplorn is a salarian geneticist, former operative of the Special Tasks Group, and former student of Mordin Solus. With Mordin, Maelon participated in the modification of the genophage, a biological weapon of mass destruction, the effects of which had been wearing off.

Maelon went with Mordin and a team of STG operatives on a mission to Tuchanka to test the effects of the modified genophage strain, assigned with the task of carrying the heavy strain dispersal unit to the deployment zone. Despite Mordin belittling his dexterity and charm, he was also described as surprisingly stronger, more intelligent, and more talented than he looked.

When it was revealed that the deployment zone contained hostile krogan, Maelon inquired if the device could simply be set up where they hid. Mordin was adamant on proper placement. They were discovered moments later and fired upon, barely escaping in time.

Maelon heard Captain Chaleen order the team to fall back to their shuttle, but Mordin announced a change of plans. He ordered a diversion of explosives and instructed Maelon come with him and haul the device to its intended location.

A hammer-wielding krogan tried to kill the scientist salarian, but he dispatched the brute easily. Maelon was surprised at Mordin's ruthless efficiency and wasn't given time to voice his thoughts in pursuit of the overall objective. Maelon reiterated the captain's order later, but Mordin just replied that risks were necessary in science while failure was not. He continued to follow orders upon reaching the deployment site, activating the device and ensuring its safety when a female krogan arrived to face off against them.

Mordin's explosive diversion detonated over the three, and covered them in rubble. Maelon was helped to his feet by Captain Chaleen, and after uncovering Mordin, they limped their way back to their shuttle. Maelon bandaged Mordin's wounds and inquired about the krogan female, who died in the blast. While Mordin alone confronted the female and he guarded the device, it occured to Maelon that the female seemed more reasonable than expected. He asked his mentor if they were doing the right thing, and Mordin reassured him of the dire galactic consequences of krogan freed from the genophage. He didn't know if krogan would be reasonable in that scenario, but he still pointed out the possibility. Mordin was convinced the risk was too high, and Maelon replied that he thought risk was necessary.

In 2185, Maelon is reported as captured by krogan warriors attempting to reverse the effects of the genophage virus. Mordin requests the aid of Commander Shepard in retrieving Maelon from his captors.

Upon confronting Maelon, it becomes apparent that he is not working under duress and instead volunteered his services to the krogan. He expresses extreme guilt for his work on the genophage, which he considers to be a form of cultural genocide. He admits that the only reason he went along with the genophage modification project in the first place was because he believed that his mentor knew best. 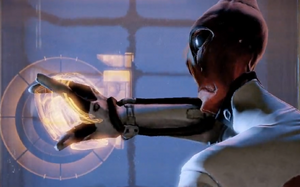 Maelon claims that, despite the genophage, the universe is no less chaotic, citing the batarian and geth attacks. He points out how male krogan fight over fertile females and become mercenaries or pirates because they have no alternative. They'd be thriving in a cultural renaissance if salarians didn't think to "play God". Maelon also claims that if the Council had a krogan army, they could have stopped Saren and the geth at Eden Prime. His reasoning is that an increased krogan population would've compelled the Council to take certain steps, consider colonial rights and have their fleets become more vigilant. Mordin dismisses this as pure speculation, and insists that their work on the genophage was correct given the verified data.

Mordin and Shepard put a stop to Maelon's experiments. Mordin is infuriated at Maelon's betrayal and his unethical experiments and tries to shoot him. Shepard can intervene, reminding Mordin he is not a murderer, or let Maelon die. If Maelon is allowed to live, Mordin suggests that he go to Omega and run his own clinic. Furthermore, Maelon won't be able to restart his work, for STG can cover their tracks, and other krogan would not be willing to believe that he could cure the genophage and would likely kill him on sight. As Maelon leaves, he tells Mordin that the genophage needs to end. Shepard also makes the decision on retaining Maelon's research data or destroying it.

It is revealed that not all females died in Maelon's experiments. Some survived and were captured by STG and brought to Sur'Kesh. If Mordin survives the Suicide Mission, he leaks the information to Clan Urdnot, provoking the necessary political pressure to have the females released. If Maelon's research is preserved, it would prove essential in finalizing a cure. The surviving female, nicknamed Eve, explains that though Maelon had good intentions, his methods became more barbaric as he went.

If Maelon and Mordin both survive, then over the course of curing the genophage, Mordin notes that he ordered STG fireteams to search for him, but concedes that the nature of the Reaper War and the size of the galaxy makes locating him impossible. Having reversed his stance on sparing Maelon by this point, Mordin notes that he would kill Maelon himself, unless the salarian were able to render aid in curing the genophage.

If Maelon was spared, he follows Mordin's advice and opens his own clinic on Omega. He also sends a message to Shepard if the genophage is cured.

If Mordin died in the Suicide Mission, and his loyalty mission was not completed, Maelon would complete his goal of curing the genophage. However, it is later revealed that there were gaps in Maelon's research that Padok Wiks could not account for when synthesizing a cure.

Retrieved from "https://masseffect.fandom.com/wiki/Maelon_Heplorn?oldid=521075"
Community content is available under CC-BY-SA unless otherwise noted.