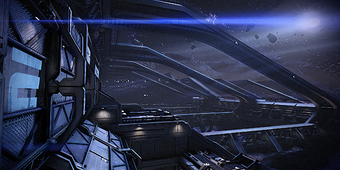 Alex Garneau is missing on Mahavid, which is under Reaper attack. Find Garneau and learn more about Leviathan.

The mission's journal entry is automatically acquired upon landing on Mahavid.

There are also several points in this mission where you may find yourself fighting enemies from multiple directions at once. If you train your Shepard with Energy Drain or Defense Matrix, you will be able to restore a downed shield quickly.

On the way down to the asteroid in the shuttle, Shepard, Cortez, and your squad will discuss the mission and the evidence you've found while you were searching Dr. Bryson's lab. After the short mission briefing, Shepard and the squad will land on the asteroid mining facility. 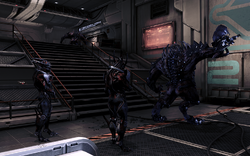 After exiting the shuttle, take the nearby lift down to the main floor. While moving off the lift, your squad will notice a small Reaper scouting party ahead, near the door to the inside of the facility. The Reapers here consist of two Marauders and a Brute. A second brute is upstairs and will not come down if you do not advance too far from the lift. There's plenty of cover nearby, and if you act quickly you should be able to take them out easily. There is an ammo pile on the right wall. Tip: If you hit one of the Marauders with a Stasis bubble before they notice you, it will catch the other Marauder as well, with the added useful effect of blocking the Brute from approaching you until you shoot the Marauders.

Head up the stairs where the Reaper enemies were located to find a Med Kit and a second ammo pile, if needed. Bypass the only accessible door to the right, and head on through to the next room. Here you'll find yourself in a reception room with T-GES Mineral Works employees hanging out, oblivious to the Reaper party that you and your team just cleaned out. Shepard and team will talk to the personnel at the reception desk, and after asking about Dr. Garneau, you'll find that the elevator is inoperable. You'll have to find a way to repair it so you can move on. 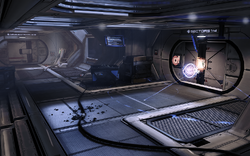 After regaining control of Shepard, you'll be able to look around, eavesdrop on some of the other personnel talking with each other, and find that you now have to repair the elevator. There is a datapad near the group in front of the customs personnel you can interact with to get some more information and 1250 credits. There is another datapad behind the reception desk that also yields credits, 2500. The men behind the reception desk will make threats while you're behind the desk, but they are not hostile.

At the far side of the room away from the door you took to get into this room, you'll find a Repair Drone Terminal you can use to activate a drone to fix the elevator. Stay near it to guide it to the elevator. This section, familiar for those who play multiplayer, also foreshadows the more difficult drone escort later in the mission. After fixing the elevator, take it up to the next floor.

Inside this hallway, you can find a datapad behind a crate of rocks to the left worth 1250 credits. Then move through either door, as both lead to different parts of connected rooms. Staff members ominously close themselves off behind partitions as you approach, and there are various objects you can interact with that show that T-GES Mineral Works is not what it seems. In the room with the potted plants are a terminal and a datapad, each with 1250 credits. The door to personnel quarters is locked for now but you won't be able to get in until you find a "personnel ID" further on. 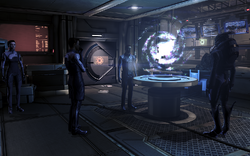 Check out the security terminal with the floor map: you need a password for further clearance. Now head to the next room with more creepy workers in conference; behind the 3D display console there's a datapad (worth 1250 credits) on the table and a door to bypass. Inside the room is an SMG High-Velocity Barrel and a datapad (worth 2500 credits) with an undelivered message by Dr. Garneau to Dr. Bryson - which contains a working password for the security terminal.

But before you return to the security terminal, press on towards the medical bay. It's locked for now but your present objective is the security station next to it - a datapad with a working personnel ID can be found there (worth 1250 credits).

Now head all the way back to the personnel quarters, with a valid personnel ID you can now enter. There is an Pistol Ultralight Materials mod and two datapads with information date-stamped almost ten years before.

Return to the security terminal and access it. It will play a security footage of Dr. Garneau's arrival to this facility earlier; but more importantly it gives you a patient number for accessing the medical bay. Now head back to the med bay and use the patient number to get inside.

Once inside, there's a Med Kit available for pickup next to a windowed room with a corpse in a table. Interact with the window to meet Dr. Garneau. After a conversation it turns out this person is being controlled by the Leviathan and it makes the thrall run away. Give chase but after the second door the only way is through the access ladder going outside.

Once outside, follow the linear path towards the objective, and you'll soon notice that the Husks are doing something rare - instead of rushing towards you as usual, they chase after Dr. Garneau. Deal with the stragglers in your way and move on to the next clearing. Grab the SMG Recoil System mod along the way. 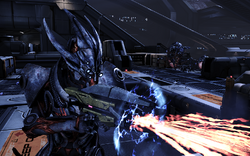 Now this is the main battleground for the remainder of the mission, terrain-wise there's cover everywhere to use and the closest elevation has a Reaper Blackstar for special occasions. It's better to leave the Blackstar there for now and bear with using conventional weapons first. Your objective is at the far end, but this time the Reapers are determined to stop you. Marauders, Ravagers and conventional Husks will drop from above to block you. A pair of Banshees will join in the fight after you've dealt with the initial wave--arguably the toughest fight of the whole level since there are lots of culs-de-sac it's easy for Banshees to trap you in, and it isn't always obvious in the heat of combat which pieces of cover can be jumped over and which can't. The Banshees present a good opportunity to use the Blackstar, though if you think you're good at ducking while under fire you can simply rush to the other side early on and preempt their appearance entirely. Taking one of the Banshees out as quickly as possible will also simplify the situation dramatically.

Whatever you choose, there's still a Ravager and a couple of Husks guarding the door that need to be dealt with, if they haven't joined the battle at the open area. Once they're dead inspect the area just next to the door and in front of it for a Med Kit and a Pistol Cranial Trauma System. 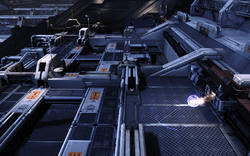 As you access the door, power goes offline and now you have to escort a vulnerable repair drone to repair two power units, located in the two separate elevated positions from the area you just came through. There's an element of time pressure in this section, since the drone "shields" bar gradually depletes even when it's not being shot. Stay close to the drone to guide it, but here comes the second half of the fight - Marauders and Ravagers will crash the party. Once the first repair is complete it's time to escort it to the second unit. Choose your path wisely: the drone is slow to navigate obstacles and will not move without you nearby. As you get close to the second power unit you'll hear the Banshee scream - the good news is that it's the last enemy on this level, the bad news is it comes from behind. If you're low on ammo or have yet to use the Blackstar, it's as good a time as any to unleash it. Once the repair is complete you're clear to proceed.

The Darkness Must Not Be Breached Edit 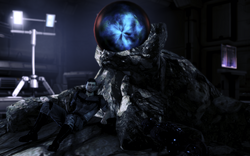 Open the door and into the mine, you'll see Dr. Garneau with his back towards the artifact and surrounded by Husks. Instead of giving you a clear shot at the Husks, he detonates the artifact, killing him along with the rest of the Husks.

Examining the area your squadmate will discover the real Dr. Garneau's body. It turns out the man you were chasing was an impostor after all. Some of the facility's personnel, apparently themselves again, approach. Not only have they no recollection of who Dr. Garneau is, they actually have no recollection of anything other than being somewhere dark and cold. When Cortez announces that the Reapers attacking the base have suddenly pulled back, the workers don't appear to know what a "Reaper" is. Finally, Shepard asks them what year it is. An asari miner answers 2176 - apparently the Leviathan has held the facility's personnel as thralls for ten years.

Retrieved from "https://masseffect.fandom.com/wiki/Mahavid:_Leviathan?oldid=511673"
Community content is available under CC-BY-SA unless otherwise noted.