View source
This article or section is a stub. You can help Mass Effect Wiki by expanding it. 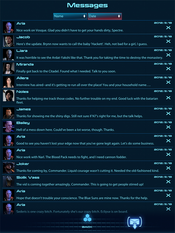 While playing Mass Effect 3, if a player has also downloaded the iOS app Mass Effect 3: Datapad and linked it with the same Origin account as linked to Mass Effect 3, they can receive brief messages from squad mates and allies. These messages are sent to Commander Shepard and influenced by who you have spoken to, decisions you have made, mission outcomes, crew recruited, as well as who is alive in your current playthrough. The messages are sorted by name of the sender followed roughly by the order in which they are sent by the sender. Names are shortened in the app. Messages are written here as they are written in the app.