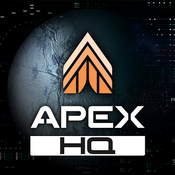 Through APEX HQ, players can view their progress in multiplayer, equip characters, assign skill points, manage Strike Teams, and access their friend list. The app cannot be used while signed into the game.[2]

APEX HQ has five main windows of operations: Home, Characters, Strike Teams, Prestige, and Updates. Swiping down any of the screens will reload its information from the servers. 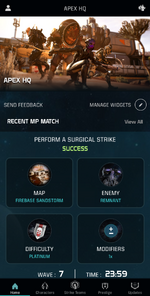 After logging in with an Origin/EA account, the homepage displays summary information through numerous widgets. By default all are enabled, although they can be switched on and off and/or reordered through the manage widgets option. Most of them have self-explanatory functions, and tapping them redirects to relevant and more in-depth sections in other parts of the app.

On certain capable devices there's an option to share these matches using Facebook's camera effects platform. The selfie camera overlays an Andromeda Initiative helmet onto the device holder's face while the back camera can be used to format the leaderboard and statistics into a shareable material for Facebook.
Prestige
Shows the current APEX and Challenge ratings. Tapping on it redirects to the Prestige screen of the app.
Strike Teams
Two numbers regarding complete or in-progress APEX Missions. Tapping on it redirects to the Strike Teams screen.
Active Character 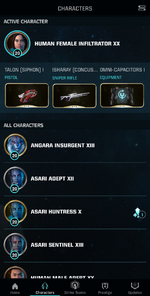 The top left icon holds the user profile, app settings, credits, and support, as well as the option to switch between accounts or log off entirely. The top right icon displays the friend list. Beside the manage widgets option is the send feedback option that allows for bug reports or suggestions for improvement.

This window shows Multiplayer Characters, split between the active character (currently selected in the game) and all other characters. The current active character's weapon loadout and equipment are displayed, although all characters can be managed equally through this panel.

The character window can be sorted and filtered by toggling the desired criteria in the icon at the top right of the screen. 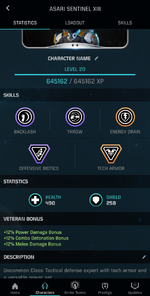 While skills can also be viewed and managed in this tab, a more unique function of this window permits giving custom character names to the multiplayer characters as well as edit their backstories from the default descriptions.

Other information displayed here are health and shield stats as well as veteran bonuses, if any, and the toggles to set the character as a favorite in the app or as active in the game.

The character's guns and equipment setup can be modified here as per existing options in the game proper. The weight bar is also displayed to help gauge against possible overloading. 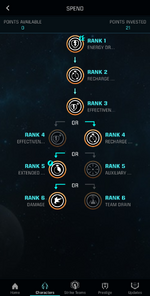 The skills tab displays the character's list of skills, points available, and points already invested in skills. Each skill has three choices on tap: view, learn, and close.

Viewing the skill displays the in-game description and current stats, as well as a manage button that opens an interstitial to the learn button from the previous menu.

The learn button leads to a skill tree visually identical to in-game, except this is ordered top to bottom instead of left to right. There is no option to reorient the skill tree even on smartphones that can switch between portrait and landscape modes. Note: Leveling skills here should be done with due thought since they are automatically committed to the character, unlike in-game where a final confirmation box is displayed before any changes. 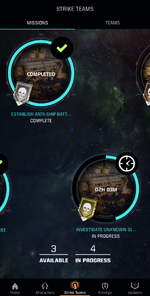 The Strike Teams management window is divided into the missions and teams tabs.

Tapping on a mission displays in-depth particulars, same as in the game proper. When selecting a team for this mission, the app arranges the Strike Teams by success rate and puts the best one in front while the others can be reviewed and/or selected by swiping left. Note: With this in mind, especially when sending out all teams at once, doing Gold missions first before Silver and Bronze ones can allow for an optimized allocation of Strike Teams.

Before actually committing the Strike Team to the mission, the next window displays their statistics and equipped items. The team's positive traits in relation to the mission are highlighted in green while negative traits are highlighted in red, whereas in the game all traits are displayed with no visual distinctions. If desired, the option to change their equipped item can also be done here, although this also costs mission funds every purchase. 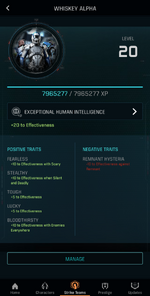 This tab displays highest-level teams first and scrolling left to right, with on-mission teams on the rightmost end. Selecting a team displays the same information as in the game, only with positive traits highlighted in green and negative traits in red. Their equipped item can also be changed here at the cost of mission funds per purchase.

The manage button leads to an interstitial to the following: edit team name, equip, retire team, and close. All are self-explanatory, but renaming teams is a function unique to this app as Strike Teams cannot normally be renamed in-game.

The prestige window shows numerous player statistics, either in relation to game completion or in comparison to other players. 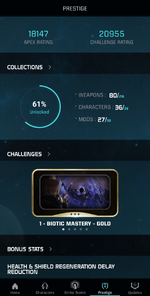 The APEX tab is the default landing tab and has two further view types: global and friends. Global displays the player's multiplayer rank and rating in relation to other players in the same range, while Friends filters the list accordingly.

The Challenge leaderboard functions in the same manner as above, but only in relation to the player's accomplishments in clearing Challenges.

The Collections section displays how many multiplayer items have been unlocked. Tapping on items in the list leads to a sublist of relevant items, again sortable and filterable through the top-right button. Unlocked items are shown full-color while locked ones are grayed out.

Discrete weapon statistics can be viewed here after they're unlocked. Unlike in the game proper, stats per weapon level can be seen in the app. However, the displayed stats are accurate up to Patch 1.10 only, and do not take into account further balance changes made after the last official update.

Merely unlocking the weapon is sufficient to see its stats from level I to X; there's no need to purchase packs beyond what is necessary. The same unique distinctions apply for weapon variants, mods, and mod variants.

Perishable items like boosters and consumables display on-hand numbers before their names. Nameplates can be set or unset in the relevant section provided they have been unlocked.

This section displays the last 5 completed challenges with nameplates, newest to oldest by swiping left. Tapping on it leads to 5 tabs: Daily, General, Weapons, and Aliens.

The Daily tab is the default page. It shows the daily challenges and what local time they expire. The other tabs display similar information as their in-game counterparts.

The Bonus Stats section shows how much is earned by the multiplayer character used in the last match. Tapping on it leads to the same information provided in-game. 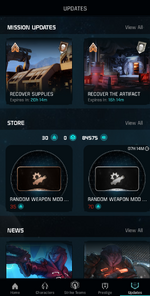 The Updates page has 3 main sections.

Mission Updates relates to Strike Team progress, but focused more on their expiry date. Tapping on it leads to two subsections: All and APEX. All means all missions that can be sent Strike Teams, while APEX are for the missions that may be manually played in-game. Unlike in the Strike Teams page, however, both also display the Platinum-level mission, if available.

Similar to the Strike Teams page, all missions except Platinum can be sent Strike Teams here but success or failure must still be checked on the proper page.

The News section has two main views: multiplayer and APEX HQ. The first one shows post-launch multiplayer campaigns presently accessible at https://apexhq.masseffectarchives.com, top to bottom from newest to oldest. The second one concerns changes to the app, with only one item at present: the addition of the Store system.