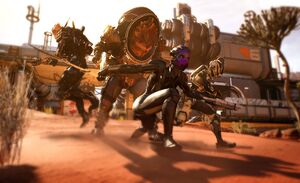 The multiplayer component of Mass Effect: Andromeda is a co-operative game mode similar to Mass Effect 3's multiplayer. Players take on the enemy threat as part of the APEX Force, whose task is to protect the Andromeda Initiative's interests. Completing special missions may earn the player certain singleplayer rewards, but otherwise the multiplayer mode is completely optional and does not affect the story of the singleplayer mode in any way.[1][2]

Multiplayer missions consist of pitting the player and up to three allies against waves of enemies on various battlefields throughout the Heleus Cluster. The number of waves is seven by default. As in Mass Effect 3, some waves are completed by killing all the enemies, whereas objective waves have a time limit. After completing the objective, remaining enemies have to be eliminated to finish the wave. Each objective awards a certain amount of XP depending on the speed of completion. The mission fails if the timer expires before the objective is completed or all players go down.

On the last wave, all players must defend against the enemy for a set time period, then retreat to the designated extraction zone within the time limit.

All multiplayer missions have three challenge difficulties, in order from easiest to hardest: Bronze, Silver, and Gold.1 Higher difficulties feature stronger and more numerous enemies, as well as difficult enemy types in earlier waves and in larger numbers, but also grant better rewards.

1There is no Platinum difficulty "for now".[1]

APEX Missions have preset modifiers, typically reducing effectiveness in some areas (such as weak point damage or shields) and increasing it in others. There are two types of APEX Mission: some refresh daily, like other Strike Team Missions, whereas special APEX Missions may be available for a limited period of a few days.

As opposed to having dedicated servers, Mass Effect: Andromeda multiplayer employs a peer-to-peer system like Mass Effect 3. There are currently no plans for supporting cross-platform play.[3] The multiplayer mode is not region-locked, although the matchmaking system prefers towards good connection.[4]

Characters' appearance, weapons, and equipment can be customized between matches, and additional equipment obtained by purchasing packs and items from the store. While characters can be assigned custom names in the APEX HQ app, they do not carry over to the game.

26 characters are available at launch:

Mass Effect: Andromeda introduces permanent bonuses to characters through a mechanic called Prestige. Each character is associated with a group of bonus stats; progressing a particular stat will, up to a limit, apply the related bonus to all multiplayer characters. Like other types of online progress, these bonuses do not apply to additional accounts or platforms.[5][6]

The store sells multiplayer equipment and item packs, and distributes special rewards earned. Contents of these packs include weapon upgrades, mods, character unlocks, and more. Packs may be purchased with in-game credits earned through gameplay, or alternatively with real currency. Mission Funds, a new currency earned through Strike Team Missions, can be used to purchase particular items in the multiplayer store.

Retrieved from "https://masseffect.fandom.com/wiki/Mass_Effect:_Andromeda_Multiplayer?oldid=473414"
Community content is available under CC-BY-SA unless otherwise noted.