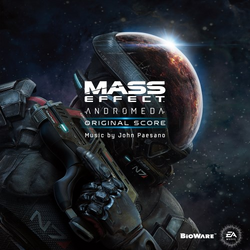 The Mass Effect: Andromeda Original Score comes bundled free of charge with the Deluxe and Super Deluxe editions of the game. It has 18 WAV tracks, a credits text file, and a 500px cover art. On March 24, 2017, it has been made available for purchase through iTunes[1] and Amazon[2].

The score was entirely composed by John Paesano. Recording was done in Ocean Way Nashville. It was intended to pay homage to the original trilogy while modernizing it with the experience Paesano can bring - in particular, his work on The Maze Runner film series was representative of what BioWare was aiming for.[3][4]

Retrieved from "https://masseffect.fandom.com/wiki/Mass_Effect:_Andromeda_Original_Score?oldid=501647"
Community content is available under CC-BY-SA unless otherwise noted.