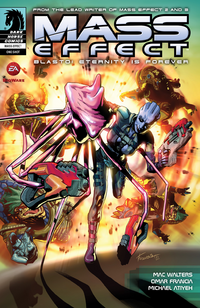 Mass Effect: Blasto: Eternity is Forever is a single-issue comic featuring Blasto, a fictional hanar Spectre featured in several films in the Mass Effect universe. The comic is written by Mac Walters, with art by Omar Francia. It was released exclusively through Dark Horse Digital on November 7, 2012.[1]

After handily defeating a group of batarian mercenaries bent on galactic domination, Blasto returns to the Citadel for his next mission. Blasto's turian handler explains that he sent three other Spectres to track Kronus, a mad krogan scientist, but they all turned up dead. Blasto scoffs at this, pointing out that he personally incarcerated Kronus. The turian reveals that he had sent the third Spectre to the prison ship where Kronus was being held, and only corpses were found. The turian orders Blasto to investigate Virmire in the Hoc system for Kronus' likely hideout. Wary of losing another Spectre, however, the turian introduces Blasto to his new partner, Cerulean Star, a famed asari actress who is also secretly a Spectre. The turian sends Blasto and Cerulean Star off, admonishing them to be careful.

En route to Virmire, Blasto explains to Cerulean Star that because Virmire is reputed to be uninhabitable because of a nuclear blast, it is the best place for Kronus to hide. Blasto's suspicions are confirmed when scans discover a newly built structure on one of Virmire's islands. Inside, the facility appears to be abandoned, but Blasto and Cerulean Star quickly encounter a krogan patrol. Blasto dispatches them, and the pair continue deeper into the facility.

Cerulean Star examines a console and learns that Kronus is building a machine that can freeze time. While the asari stays behind to try and disable the machine, Blasto kills more guards and confronts Kronus himself. The evil krogan uses a gauntlet to freeze Blasto in time, gloating that while he rules the galaxy, Blasto will be trapped for eternity and unable to stop him. Two krogan then bring in Cerulean Star, who reveals to Kronus that he underestimated her before kicking him in the jaw, breaking free from her captors, and forcing Kronus to un-freeze Blasto at gunpoint. The krogan complies, but then activates the facility's self-destruct sequence. Kronus flings one of his guards at the Spectres and runs for it, but an explosion knocks him over a railing and he plummets to his death.

Blasto and Cerulean Star escape just as the facility explodes and swim to shore. Blasto admits that Cerulean Star was more capable than he had thought, and thanks her for freeing him from Kronus' eternal prison. Cerulean Star mentions that asari believe in embracing eternity, and Blasto replies that if there's one thing he excels at, it is embracing.

Retrieved from "https://masseffect.fandom.com/wiki/Mass_Effect:_Blasto:_Eternity_is_Forever?oldid=482222"
Community content is available under CC-BY-SA unless otherwise noted.