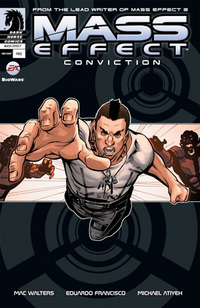 Mass Effect: Conviction is an eight-page mini-comic that details how Alliance soldier James Vega came to be a part of Commander Shepard's trial on Earth. It is written by Mass Effect 2 lead writer Mac Walters.

The comic was first mentioned in an interview with Mac Walters on July 26, 2011 as an unnamed third eight-page comic that he was working on, but no details were provided.[1] Mass Effect: Conviction was released in September 2011 through Dark Horse Digital. It is included in the graphic novel release of Mass Effect: Invasion.

Days after the events of Arrival, the galaxy is in turmoil over Commander Shepard's alleged actions. While the Citadel Council denounces the Commander and Councilor Udina deflects blame from the Systems Alliance, the Batarian Hegemony calls for retribution for the apparent terrorist acts. 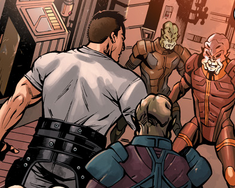 On Omega, Alliance soldier James Vega plays cards in a bar as he watches a newscast about the uproar. Without warning, he rips the screen from the wall, offering to pay the krogan bartender for the damages. The batarians Vega was playing cards with become confrontational and accuse him of being a "Shepard Lover". Vega tries to calm them down, but they charge him. He bashes one batarian over the head with the screen, then rushes the leader of another group, both of them crashing through a window. The rest of the batarians surround Vega and attack.

The fight is interrupted by the arrival of Admiral Anderson and a contingent of soldiers. Anderson informs Vega that he is being brought in for more training. As they board an aircar, Anderson tells Vega that he must get past "the incident on Fehl" and "be the soldier we expect of you". Vega argues, demanding that Anderson throw him in the brig as they approach the Normandy SR-2. Anderson then explains that Vega will actually be guarding the brig, and one special prisoner: Commander Shepard.

Retrieved from "https://masseffect.fandom.com/wiki/Mass_Effect:_Conviction?oldid=482216"
Community content is available under CC-BY-SA unless otherwise noted.