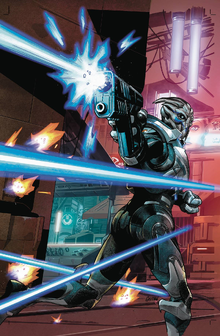 A young Turian [sic] military recruit goes undercover in order to infiltrate the mysterious Andromeda Initiative—and ultimately retrieve a scientist who’s made a potentially devastating discovery. Tying in to the highly anticipated release of Mass Effect: Andromeda, writer Jeremy Barlow and artist Gabriel Guzman team up to create the next exciting chapter of the Mass Effect comics series!

A shadowy salarian figure performs invasive biotic implant procedures on himself, assisted by a trio of LOKI Mechs. In his quest to augment his biotics he apparently overloaded his previous bio-amp upgrade, and with the installation of another one he fries the three mechs upon test activation.

Elsewhere, Lieutenant Tiran Kandros is the sole survivor of a skirmish with geth. Following the disappearance of a civilian contractor's supply transport, his unit was dispatched to deal with the problem, only to walk into a geth ambush upon planetfall. He takes a geth head as a trophy back with him, and the experience leaves him with many questions, starting with "what is the Andromeda Initiative?" 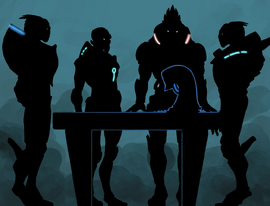 Back with the turian military, Kandros presents the geth head to his superiors Commander Narkkin and Admiral Ravis, his mother. Before the geth purged its data core, Tiran found evidence that someone involved with the Andromeda Initiative is tinkering with outlawed geth technology. Narkkin is dismissive over what he deems is the younger Kandros pulling in favors with his influential mother, but another turian in the group confirms that the Hierarchy has been having suspicions about the Initiative: the massive ships being built, the tens of thousands flocking to sign up, the acceleration of their timetable and construction plus the geth revelation all point to the makings of a private military that could prove to be a threat. Tiran proposes to infiltrate the organization to find out what they're really up to.

After the meeting, Ravis and Tiran discuss the latter's real motivations for taking the job. Tiran wants to prove he isn't merely freeloading on the Kandros family name, a name that served with particular distinction and opened many career paths for its members. Ravis claims even she had to step out of her own mother's shadow as well, and bids her son to come back alive at the end of the mission. 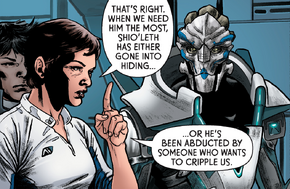 On Earth, Tiran arranges for a protest to happen outside the Initiative's headquarters. The distraction works as one biotically capable security officer disperses the protesters and helps Kandros get in, past the wait list and into the office of project founder Jien Garson herself.

Tiran presents himself as "Sanjin Vinnick", dishonorably discharged ex-military and ex-con who served time for domestic assault and claims to be looking for a job and a fresh start. Garson decides to test "Mr. Vinnick"'s mettle by tasking him to track down a quarian scientist named Shio'Leth vas Novarra. Shio has found a way to gather data from the Andromeda galaxy in almost real-time and therefore is of crucial importance to the Initiative's colonization efforts, but a tiny flaw is discovered in his equations and suddenly he isn't around to explain why. Kandros partners up with the biotic security officer, Luna Shanks, and sets off to start looking at the Citadel. 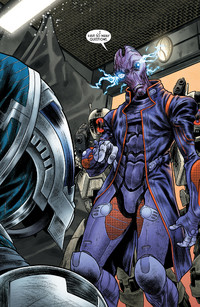 Shanks isn't averse to using her powers and brawn to squeeze information out of people in the Citadel's underbelly. The human and turian figure the quarian might lay low if he's on the run, necessitating the need to question duct rats who may know something. One particular duct rat claims that a jittery quarian in the lower ward flophouses is making people there nervous. True enough, Shio'Leth is in the middle of recording a farewell message to someone when the biotic salarian barges into his room, flanked by two LOKIs.

Vinnick and Shanks come across a group of aliens running away from the flophouses. Vinnick tries to ask a drell what happened, but all he can gather is some sort of "devil" and a quarian are involved. The pair arrive at Shio'Leth's hovel, only to find two destroyed LOKIs and an encrypted datapad but no quarian. Thinking the Migrant Fleet may be of assistance in unlocking the datapad, Vinnick tells Shanks where they should go next.