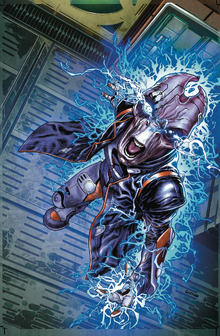 As his investigation into the Andromeda Initiative deepens, Tiran Kandros encounters a terrifying and deadly adversary—a salarian mercenary named Agent Zeta. Tying in to the highly anticipated release of Mass Effect: Andromeda, writers Jeremy Barlow and John Dombrow and artist Gabriel Guzman team up to create the next exciting chapter of the Mass Effect comics series!

Following Shio'Leth vas Novarra's escape from the Citadel, Tiran Kandros holds a holoconference with Admiral Ravis apprising her of the developments. Ravis has no intel on the quarian's whereabouts, though she gives her son the last known coordinates of the Novarra, Shio's home ship.

At an unnamed planet where the Novarra crew performs a strip-mining operation, Luna Shanks inquires about the identity of the person "Sanjin Vinnick" was talking to, suspicious about the encrypted channel used in communication. Vinnick tells her that was his mother, though he chalks up the encryption to a security precaution for the old military contacts who allegedly tracked the Novarra for them.

A quarian finds Vinnick and Shanks loitering near one of the excavators and brings them to the office of Novarra's captain, Jakin. Upon learning who it is they were looking for, Viegle, the quarian who found them, quickly reacts, although he tells them they were just friends when pressed for what he knows.

Jakin informs them what he remembers about Shio: a squirrelly quarian thought to be naive for attempting to make friends with the geth. Upon coming back from his Pilgrimage, Shio claimed he spent some time with a geth enclave who showed him how to find a new homeworld way beyond where everyone else was looking. Nobody believed him, and when he was caught attempting to input coordinates into the nav computers without permission, Jakin banished him from the Migrant Fleet.

With the Novarra a dead end, Shanks presents Shio's datapad to Jakin asking for assistance in accessing it. Jakin declines citing cultural reasons and Vinnick is beginning to lose patience with the proceedings, but Shanks intervenes and attempts to smooth the negotiations over. However, a commotion outside diverts all of their attention.

The biotic salarian chasing Shio has also arrived at the mining site, wreaking havoc on machinery and quarians alike while looking around for Viegle. Shanks grabs Viegle and starts heading out the back door, but the salarian obliterates the flimsy structure they are in. While they pick themselves up from the ground Vinnick recognizes the damage as analogous to what happened at the Citadel flophouses. Shanks orders him to take Viegle to their ship and escape, intending to take the salarian on a biotic showdown. 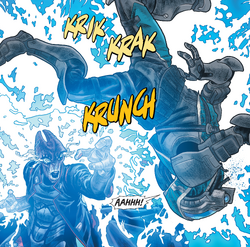 The salarian manages to blast Shanks off a cliff at the cost of overloading his bio-amp. Jakin attempts to stop the salarian with his Novarra marines, but all of them fall to the salarian's bonecrushing telekinetic assault. Vinnick orders Viegle to run straight for their shuttle before going back to help Shanks up, who got hold of a metal bar jutting from the cliff face. By the time both of them get back up, however, Viegle's body has also been biotically crushed.

In Viegle's last moments he reveals Shio is his husband: he had Shio smuggled off to Omega, and he told the salarian about it under torture. Vinnick gives him the datapad Shio meant for him, musing over the next destination as Viegle passes away.

Retrieved from "https://masseffect.fandom.com/wiki/Mass_Effect:_Discovery_2?oldid=487722"
Community content is available under CC-BY-SA unless otherwise noted.