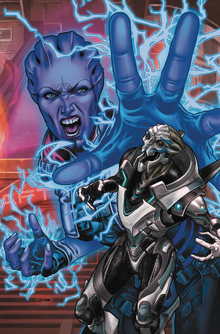 Following a lead to the lawless space station Omega, Tiran Kandros is closer than ever to uncovering the Andromeda Initiatives [sic] biggest secret. Unfortunately, so is the deadly Agent Zeta! In a story that ties in to the Mass Effect: Andromeda game, writers John Dombrow and Jeremy Barlow and artist Gabriel Guzman team up to create the next exciting chapter of the Mass Effect comics series! 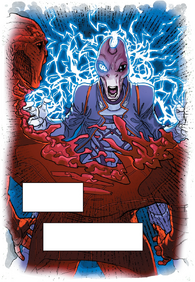 During another holoconference with her son, Admiral Ravis discloses what she knows about the powerful salarian biotic Tiran and Luna Shanks faced off earlier. Agent Zeta has such a reputation that had the Turian Hierarchy known he was involved they would never have sanctioned Kandros' mission in the first place. Ravis tells her son the mission is done, but Tiran wants to see it through even if it means he's going to take the heat for it. She acquiesces and tells him she'll do what she can.

On Omega, "Sanjin Vinnick" takes a cloak from a vendor and pulls the hood up. Shanks asks why, but he attributes it to simple cautiousness. A couple of gun-toting batarians then attempt to extort them for "docking fees", but another turian comes along and threatens them off. Vinnick tries to assure the newcomer they're fine, but the turian, Nyreen Kandros, recognizes him even with the hood and blurts out his real name in front of Shanks. 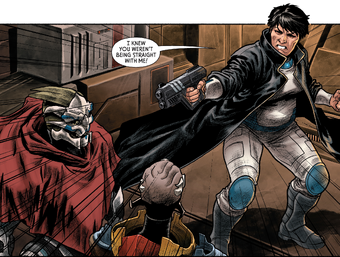 Her suspicions about her partner confirmed, Shanks draws out her M-4 Shuriken and points it at Tiran, unwilling to hear his explanations. Nyreen distracts her with biotics while Tiran subdues her from behind, as Nyreen also wants to hear Tiran's story.

Nyreen brings her cousin to Aria T'Loak, who biotically strangles him the moment they meet thinking he's a saboteur. Nyreen vouches for her cousin, so Aria lets him go but demands the truth from him. Tiran then explains he's with the Andromeda Initiative on a mission to retrieve a quarian scientist. The Pirate Queen of Omega doesn't believe him, but ultimately doesn't care as long as she doesn't see him on the station again after doing what he needs to do. Afterwards, she also scolds Nyreen for wasting her time with her problems.

The cousins then discuss the infiltration of the Andromeda Initative. Tiran tells Nyreen it was his idea because the sheer scale of the Initiative's work must mean there's a sinister side to it. Nyreen takes the Initative at face value and calls their ambition an inspiring "collaboration", but Tiran thinks the line between "collaboration" and "conspiracy" is a thin one.

Because the Kandros cousins dreamed of escaping the family's prestigious legacy since they were kids, Nyreen suggests that Tiran should actually join the Initiative and explore another galaxy to make a name for himself. Tiran is shocked at the idea, but even if he wanted to he still has a mission he intends to follow through. Nyreen encourages him to think it over. 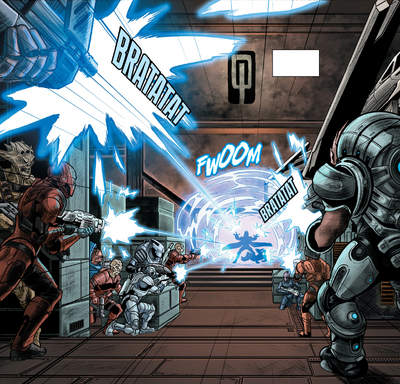 Later, Tiran provides full disclosure of his real mission to Shanks. In response, Shanks tells him the story of how she came to work with Jien Garson. She thinks accepting Tiran into the Initiative is the first time Garson has been wrong in assessing people, but the turian disputes it even though the Initiative's scale and ambition frightens him. Tiran supposes Garson must know something more than they do if she's willing to trust him.

Nyreen takes her guests to an armory in preparation for the inevitable battle with Agent Zeta. One of her batarian henchmen comes in to announce Zeta has been spotted, prompting Nyreen to ask if the massive amount of firepower they're packing is really needed for a single salarian holding a quarian hostage. Tiran thinks it isn't even enough: a force consisting of at least eleven fighters - vorcha, batarians, turians, salarians, even krogan - unload their weapons ineffectually against Zeta's barrier. Nyreen sees the point upon seeing the demonstration. 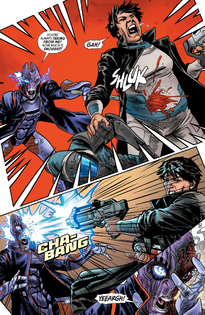 Nyreen and Tiran deal distracting assaults on Zeta while Shanks teams up with another biotic in the group to produce a biotic explosion. The explosion destroys Zeta's cybernetics and knocks him to the wall, providing Shanks the opportunity to rescue Shio'Leth vas Novarra from the salarian.

Enraged, Zeta stabs Shanks in the back with a thin rod, causing Shanks to fire her M-22 Eviscerator at his head. This only burns half of Zeta's face, further enraging him. He unleashes a biotic blast that knocks everyone off the ground, buying himself time to escape.

In the aftermath, Nyreen assesses Shanks' injury as not life-threatening, but Shanks is out of commission for the time being. Shanks beseeches Tiran to bring Shio back to Earth, but the quarian objects because Zeta is headed for the geth array used by the Initative to chart the Andromeda galaxy. Nyreen thinks it's a suicide mission and sarcastically bids farewell to her cousin, but Tiran tells her he's thinking about what they discussed earlier.

The next holoconference between the Kandros mother and son proves to be dour. Ravis informs Tiran he has been declared AWOL and accused of gross dereliction of duty, giving the Hierarchy no choice but to arrest him should he proceed further. Ravis hopes whatever her son is going to find is worth the cost, and Tiran thinks the same thing.

Retrieved from "https://masseffect.fandom.com/wiki/Mass_Effect:_Discovery_3?oldid=487723"
Community content is available under CC-BY-SA unless otherwise noted.