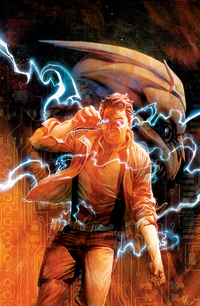 Whether born of human curiosity or arrogance, mankind's first steps onto the galactic stage have ignited a war with the alien turians. Although the end of hostilities is in sight, one man's fight is just beginning. It will take him far beyond the realms of human knowledge, into conflict with some of the most notorious villains in Mass Effect--a story exclusive to these comics![1]

Jack Harper awakens from a strange dream aboard a turian starship. Jack is startled that he is aboard a turian ship, then he discovers he is restrained. The turians in the room tell him to calm down as the restrains are there for not only his protection, but for theirs as well. Jack then hears Eva Coré and sees her and a turian enter. The turian orders Harper released from his restraints and Eva tells Harper that both of them are prisoners and that he has been in a coma for weeks. Jack asks about Ben Hislop, and Eva says he died via electrocution from the device. Eva also reports that it nearly killed him as well. Jack then asks where Ben is, but Eva says that Desolas Arterius split them up and she has no idea where he is. The turian in the room says that whatever seemed to have happened to Ben has left him unaffected and that Harper is in perfect health as far as they can tell.

Eva then turns on the turian and asks his name. The turian introduces himself as Saren Arterius, that Desolas is his brother, and that Jack and Eva have him to thank for not leaving them to die. Eva counters saying that they are being taken to a prison camp on Palaven and they should be thankful. Saren however counters that by saying that Eva is a handful, almost killing three guards while waiting, and that she is mistaken..."about a lot of things". Jack and Eva then see that they are approaching Arcturus Station and Jack asks how long he's been out. Saren informs him that it was long enough because the war is over, and they are being taken home.

Aboard Arcturus Station, General Williams is greeting Desolas, or General Arterius, when he arrives in the hangar bay. Desolas says that he is sorry that he didn't introduce himself properly on Shanxi, but he was fleeing at the time and he assumed that he was busy. Williams reminds him that the Alliance retook the planet then turns his attention to the size of his escort. Desolas reminds him that he doesn’t know everything about the turians and if the Citadel Council hadn't intervened, then they wouldn't find out. Williams says that the cease-fire wasn't his idea and that if Desolas wants to fight it out, he is happy to oblige, and if that isn't the case, then he asks for his people. Desolas mentions that he is amused that Williams would trade so many turians for just two operatives, and mercenaries at that. Eva then comes charging at Desolas, Jack tries to tell her to not do it, but she tackles him to the ground before being pulled off by Saren. Eva yells at Desolas for not helping Ben, but Desolas ignores it and tells Saren to be careful with her because, while humans may bark like varren, they are fragile. Saren mentions that he had to do something because his new bodyguards weren't of much use. Desolas mentions that they have their uses but you have to know how to talk to them. Desolas then turns to one of them and begins speaking in a language that Jack appears to understand. Desolas notices this and turns, inquisitive, but then redirects his attention to General Williams. He reminds Williams that Eva's attack is a violation of the treaty protocol and that he should take the prisoners back until a higher authority can rule on the matter. Williams counters by saying that he's had them long enough and to get off the station.

Later in a medical bay Williams is talking with Jack and mentions that he doesn't know why Desolas suddenly wanted to check over Jack again. Williams also mentions that Jack has the vitals of a first year cadet and that whatever the device did, it seems that it was harmless. Jack counters by saying that Ben wouldn't agree with that statement. Williams apologizes and says that Ben was a good kid, which he continues by saying that he left a lot of good kids down there. He mentions that now the Alliance wants them to play nice with the turians, even though they were on the verge of winning, just to curry favor with "this Citadel bunch". Jack asks if it is more aliens, and Williams continues by saying that money is doing the talking and that it is the way of the future. "Cohabitation with native species to father Mutual interests" is how the Alliance puts it. Williams then mentions that he is resigning but then tells Jack that he shouldn't. Jack says that he can't, not after what he saw, and he mentions that the artifact is connected to those things he saw. Jack then says that he heard Desolas' bodyguards tell him they were called to the device. Williams notes that, since Jack understood what they were saying, maybe he can find out more and gives them leave to take his personal shuttle, if Jack can pry Eva's arms off the fuselage.

In the hangar, Eva asks why the General is giving them his shuttle. Jack says that it is his to give and says that he thought it would cheer Eva up. As the two start climbing the boarding ramp, Eva is mentioning that he hasn't flown something half as nice when Jack collapses on the ramp. Eva rushes to his side and says that she know it was too soon to go anywhere. Jack counters that they, and he, can't wait any longer. He mentions that he has been having visions and headaches since he woke up. Eva asks about what and Jack says it was about darkness, the future, and that it is all tied to that artifact. He mentions that is why he is going, to figure out what is going on. Eva, however, asks where they can go, as they don't know where it was taken. She says that they could have taken to Palaven, but they can't go there now. Jack then counters by telling her that they have to go to Illium.

After several relay jumps, Eva mentions that it doesn’t make sense and she must have been out of her mind to go this close to the Terminus Systems. There haven't been enough humans that have seen Illium to start a band. Jack reminds Eva that she thought he was dying, that he feels much better, and that if Eva wants a shot at Desolas, then this is her chance. Jack says the artifact is on Illium, and that he can't see Desolas going anywhere without it.

Upon landing in Nos Astra, Eva takes in the sights, and based on what she sees, asks how humans will ever catch up. Jack calms her by telling her to not worry about it, and that humans will have it all soon. He reminds Eva about Clarke's Third Law. Advanced technology only looks like magic and if they remember that, then they have nothing to fear. Eva then asks what Jack is afraid of and why are they on Illium, and he replies that he is afraid that some of it may be magic.

Sometime later Jack is speaking to several asari in their native language while Eva looks on. When Jack returns, Eva asks how he can speak to them in the asari language. Jack says that how else was he going to communicate with them, which Eva counters by saying that he should be using a language that he actually knows. Jack is puzzled for a second, and acknowledges Eva by saying that it just came to him, he doesn’t know why, or what to do about this. Jack then points out a car and says they are for public use and that he's been itching to try a foreign model. Eva says that he should do flying this time, to which Jack agrees.

While flying Jack starts looking over the local Extranet for information about the Shanxi relic. Eva asks why they wouldn’t take something like that directly to Palaven to which Jack replies that for the same reasons they kept it aboard a ship for so long. It is unknown technology and he suspects they don't know more about it than they do. Jack goes on to say that they all know it's dangerous and that Eva saw what it did to Ben. Eva then tries to talk to Jack, but he ignores her and keeps searching and says that it may be a weapon, which is why they didn't want it too close to Palaven and were taking it to Shanxi for study. Eva tries to cut in again, but Jack continues by saying maybe that is why they didn't want humans going there. Then he finds the information he was looking for and he asks Eva what she would bet to say that the turians are looking for them.

When they reach their destination, Eva mentions her feelings about the area, in that it is unsafe. Jack says that most of the city is under surveillance, so Desolas probably wanted to keep clear of it. Jack says that was probably so they could grab him, but he bets that he can trap one, and then find out what is going on. However, before Jack can finish his sentence, Saren ambushes them with Desolas' bodyguards. Jack pulls Eva out of the line of fire, then exchanges a bit of fire before taking cover. He is not surprised to see them, and that Desolas said they would show up. Saren mentions that Jack was affected by the Arca Monolith to a greater degree than he let on, and that they have more tests to run.

Saren orders the guards to seize Jack, but he and Eva run through corridors being pursued by one of the guards. They exchange fire with it, while it returns fire by throwing items at them. Eva asks Jack what they are, but as he tries to tell her something, the guard grabs him by the neck. Eva comes around and prepares to bash the butt of her pistol over the guard's head, when Jacks tells her not to. The guard's hood falls revealing Ben, with a few enhancements.

Retrieved from "https://masseffect.fandom.com/wiki/Mass_Effect:_Evolution_2?oldid=517408"
Community content is available under CC-BY-SA unless otherwise noted.