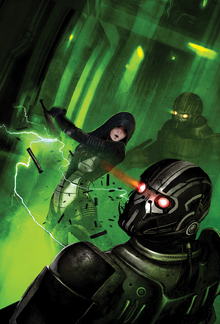 Before joining Shepard, master thief Kasumi Goto was known as the most skilled burglar in populated space. Witness her early adventures as she pilfers from the galaxy’s most elite—and most dangerous![1] 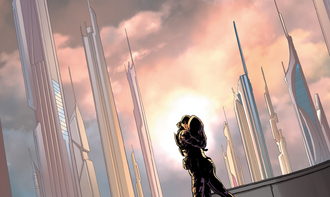 Grayboxes were outlawed in 2175 CE due to an incident regarding Keiji Okuda. Cerberus has gotten hold of Kasumi Goto's case file detailing her botched heist on Donovan Hock's estate and the loss of her partner, Keiji. The story begins two days before Keiji's death, shortly after his acquittal from charges of graybox-assisted espionage.

Keiji arrives at his apartment on Illium finding the place festooned in romantic decorations after switching the lights on. Kasumi decloaks in front of him and begins the celebration of his release with a kiss. She feels that it's time for a fresh start as she doesn't like Keiji working for the Alliance, so Keiji opens his omni-tool and shares the data on their next job before letting himself and Kasumi enjoy themselves.

Less than a day later on a ship above a Bekenstein cityscape, the pair are getting ready to drop directly to Hock's property from above. Keiji is beginning to have second thoughts because of the danger in that part of the plan, but Kasumi reassures him. Twice more they taste each other's lips; just before jumping out of the ship and after executing a stylish landing. 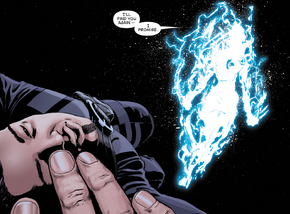 Their reconaissance revealed only light security at the entrance, so when the pair discover more guards inside the building Keiji begins to wonder if they were expected. Kasumi activates her cloak and scouts ahead, counting six guards in their path. She distracts the guards by beating them up, deploying Keiji's decoy program to misdirect them further. The two share status reports, but Keiji abruptly screams over the comm, causing Kasumi to panic and seek him out. Keiji is stabbed in the head by Hock himself, forcibly extracting his graybox before leaving him to his fate.

Kasumi's distracted blundering is heard by the guards she misdirected, causing them to pursue her to the third floor. Two of the guards almost catch up to her, only to be walloped with their own batons. Kasumi wastes no time in unlocking the door leading to Keiji, but she finds him nearly dead.

With his dying breath Keiji implores Kasumi to escape and then retrieve the graybox. It contains his memories and his love, but she needs to survive their present predicament if she is to get it back. The grieving Kasumi embraces him one last time, forced to leave Keiji's body behind but promising to find him again.

Retrieved from "https://masseffect.fandom.com/wiki/Mass_Effect:_Foundation_10?oldid=482420"
Community content is available under CC-BY-SA unless otherwise noted.