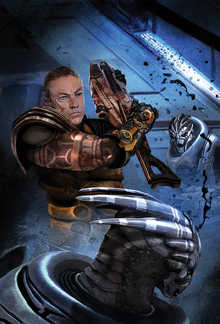 While busying herself on the Lazarus Project, Miranda Lawson is approached by Rasa, who is demanding to know why she's under indefinite medical observation. The poison Rasa received on her last mission is yet unknown to Cerberus, so Miranda justifies the order for the agent's own protection. Rasa insists on a better explanation, but Miranda reveals she knows about the agent's attempts at accessing restricted Lazarus Project files. Miranda cautions her to focus on her job of screening the Shepard team's files.

The Cerberus dossier on Zaeed Massani comes from operative surveillance recordings in Afterlife Club, Omega, during a drinking session between Zaeed and said operative. Zaeed begins with depicting his time as a co-leader of the Blue Suns and how disagreements on handling the batarians led to the loss of his eye and his expulsion from the group. Zaeed recovered to the point of being able to go a full day without thinking about revenge, but he grew prickly over claims of being washed up. 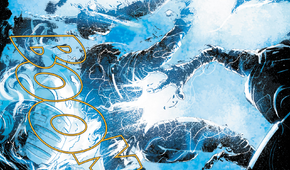 Zaeed pulls himself together and gets a job from the Shadow Broker: he is to crash the turian frigate Verrikan. The Broker doesn't care for specifics except that the vessel is to be conspicuously destroyed, and Zaeed accepts the offer in anticipation of a very large payoff.

The former Blue Sun leader puts together a crew from some of the worst scum in the galaxy: Kendo Holin, a salarian tech specialist; Tristana, an ex-Justicar and ex-girlfriend; and Jace Reyn, an ex-Blue Sun loyal to Zaeed.

The rest of Zaeed's four-man crew are very skeptical of destroying a frigate all by themselves, but Zaeed lays out the plan. The team infiltrates the frigate via the refueling depot at Trebia. Zaeed's inside man Polonis opens an airlock for them. They make a beeline for the bridge before security mobilizes, lock themselves in, then crash the frigate into the nearest rock.

Unfortunately, the Verrikan's head of security, Garkko, catches Polonis in the act and has the treacherous turian subdued. Zaeed's team make it to the frigate, but instead of getting in they are sucked back out. Everyone's tether cables hold except for Kendo Holin's, upping the payout into a three-way split.

The team finds another way aboard. Zaeed entrusts Jace and Tristana to cause havoc while he heads to the bridge, later running into Garkko himself. He takes Garkko hostage when a massive blast annihilates the turian's accompanying soldiers. Jace and Tristana are holding out on their own, but Tristana abandons Jace after "getting bored" of the defensive action.

Meanwhile, the turian defense garrison on Impera detects a distress call from the Verrikan. Its personnel make the judgment call to shoot the frigate down if it begins to threaten their airspace. 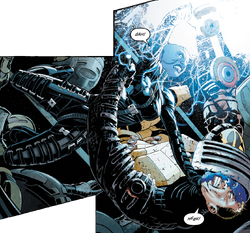 Zaeed makes it to the bridge door with a gun pointed at Garkko's head, using him to override the door's security protocols. The bridge is full of turians, all with guns pointed at Zaeed. Before any standoff can ensue, Garkko's head explodes in a shower of blue: Tristana shot the security chief's head off. She and Zaeed make short work of the bridge crew shortly afterward.

With the job all but complete, Zaeed begins the procedure to crash the ship. Tristana turns on him after doing so, revealing her to be under Vido's employ. Impera's gravity kicks in, throwing them off-balance and giving an opportunity for Zaeed to retaliate. The Impera defense garrison, receiving no contact from the bridge, begins firing on the Verrikan after intoning a plea of forgiveness from the Valluvian Priests. A brief scuffle between the ex-lovers ends with Zaeed victorious as he manages to kick Tristana off a hole that opened up on the hull. As the ship disintegrates around him, Zaeed locates an escape pod and ejects himself to safety.

Rasa deems Zaeed's account interesting as she looks over the Shepard clone's tank. Miranda watches Rasa on a live cam feed and contacts her superior to report a problem with the agent.

Retrieved from "https://masseffect.fandom.com/wiki/Mass_Effect:_Foundation_11?oldid=482421"
Community content is available under CC-BY-SA unless otherwise noted.