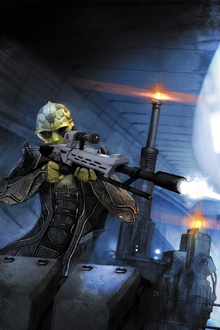 When Thane is given a chance at redemption, will he be able to overcome his blood-soaked past as a killer in order to have a chance at a new life?[1] 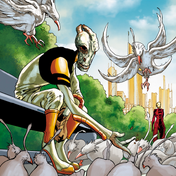 The Illusive Man receives an urgent message from Miranda Lawson about agent Rasa's descent into untrustworthiness. Miranda knows that Rasa is aware of being watched, but for the moment she is compiling the dossier for Thane Krios. The Illusive Man recommends cutting their losses if Rasa has become a liability, not minding the resources Cerberus spent on developing her.

The dossier on Thane is obtained through a mere interview. Thane readily recounts his life story in answer to questions regarding his mission integrity.

On a high-rise building with a sniping point to a park below, Thane readies his rifle against the target he was paid to kill: an old salarian war criminal who went into hiding. Unaware of the incoming hit, the salarian goes about his business of feeding the park's birds. The headshot is ready but a stranger suddenly appears in front of Thane's scope: the drell who would become his future wife Irikah. Irikah warns the salarian of the danger and gives him enough time to run while Thane recoils away from his gun. 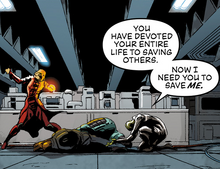 Thane is bewildered at his own emotions and the woman's actions. He resorts to tracking Irikah's activities as per his training, determined to know more about her. He gets his chance when two thugs break into Irikah's lab with the intent of torching it. Irikah's unarmed LOKI Mech assistant is useless against the intrusion, but Thane takes a moment to sneak in and dispatch the drell attacker before Irikah takes care of the turian one.

Irikah demands to know who Thane is, having determined he isn't one of the intruders. He confesses to be the sniper Irikah foiled earlier. She is about to call the lab's security when Thane pleads for redemption by her hand.

Over time, the two grow close together. Irikah eventually forgives Thane. Thane feels alive for the first time because of her, while Irikah receives his protection against further incursions. The relationship soon progresses to include dates, and Thane begins to consider a future with her. 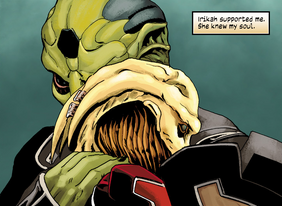 Following Irikah's advice, Thane seeks out his hanar handler and requests to be released from his Compact. The hanar is reluctant, warning him that not all are destined for happiness, but Thane convinces his handler he is willing to risk it. He returns to Irikah with the news, and weds her soon afterward.

Thane grows listless and uncertain as the freedom he sought isn't what he thought it would be. Irikah gives him a coin that once belonged to her father, for him to rub to help bring about peace of mind. Kolyat is eventually born to the family, and Thane struggles to make ends meet by taking on menial jobs as he doesn't have any civilian qualifications. He knows little of being a father, immersing himself in work instead of acknowledging his son. 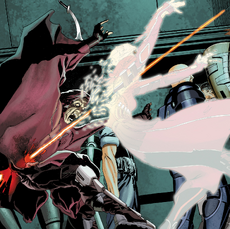 Thane eventually returns to the life of killing, with Irikah's support. His jobs take him farther and farther away from his family despite his efforts to remain close. When Thane takes on a gang of batarian slavers, the retaliatory attack destroys his family.

The surviving slavers pay the Shadow Broker for Thane's identity. Too scared to take on Thane directly, the slavers wait until he was away to make a move on Kolyat and Irikah. Kolyat manages to hide, but of Irikah only the massive bloodstains on her home tell her fate.

Thane suffers a breakdown upon returning to his home. He hunts the culprits down one by one, letting them suffer slow tortuous deaths in contrast to his clean and efficient methods. After extracting the name of the final perp, Stiv Kay, Thane readies to snipe at him from afar. Memories of Irikah blocking Thane's scope come unbidden, but Thane shakes it off and fires the gun anyway. Stiv initially survives, but Thane takes his time with him afterward.

On his return to his seaside home, Thane waxes introspective about his life. He tosses the coin Irikah gave him into the sea, vowing to walk the path he was given.

Retrieved from "https://masseffect.fandom.com/wiki/Mass_Effect:_Foundation_12?oldid=482422"
Community content is available under CC-BY-SA unless otherwise noted.