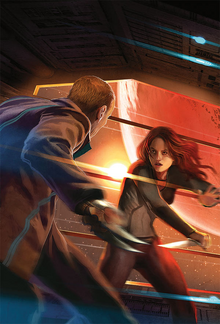 Mass Effect: Foundation starts with a bang, introducing readers to an enigmatic "agent" and revealing the story of her time spent on the violent mining colony of Themis.[1]

In 2161 CE, deep within an asteroid-mining facility orbiting the gas giant Themis that supplies the majority of materials for the as yet incomplete Arcturus Station, a young boy working in the mines carrying rocks is accosted by the foreman for allowing rocks to fall out of his sack. Before the foreman can backhand the boy, a mysterious woman appears and stops him, then asks if he is indeed the foreman. Angered, the foreman attempts to punch the woman, who nimbly dodges the blow, pulls him to the ground, and strikes his throat with her arm. As the foreman struggles to breathe, the woman pulls a chip from his pocket and demands that he tell her the location of another man. The foreman remains unresponsive, wheezing heavily. The woman puts her boot to his shattered windpipe and kills him, then tells the boy to follow her if he wants to be free. 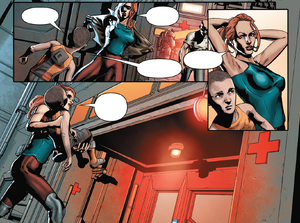 As they depart the mine, the boy is initially apprehensive, fearing that he will be recognized by the guards not permitted to leave. The woman tells him to keep following her and act as if he is supposed to be with her; together they nonchalantly pass the guards without incident. In the facility's residential section, the woman tells the boy to pretend to be hurt and cry, ignoring the boy's questions about who she is and who she is looking for in the facility. She changes her appearance by discarding her jacket and tying up her hair, then carries the boy inside a clinic, calling for help for her "son". A doctor takes the boy away for diagnostic tests while the woman slips into a staff room. Throwing on a doctor's coat and glasses, she searches a computer terminal for information about the man's whereabouts.

Leaving the clinic with a small box, the woman asks an injured miner to point out the living quarters for a man named Roth. At the door of Roth's residence, she gets around a guard by posing as a clinic doctor there to deliver Roth's medications. Inside, she sheds her disguise, pulls a knife, and quietly approaches a man, presumably Roth, talking over a headset about selling the mine's workers to the turians after Arcturus Station is completed.

She presses the knife to Roth's throat and he ends the call, asking what she wants. The woman orders him to sit at his desk and make "an extremely generous donation" to a banker named Barla Von. Roth smirks, saying he should have guessed the Shadow Broker was responsible. Surprised, the woman exclaims she never mentioned her employer; Roth tells her she didn't have to mention him, but he appreciates the information she inadvertently gave him.

Without warning, he shoves his chair back, knocking the woman into the window behind them. Drawing a bladed claw-like hand weapon, the man reveals he was only acting as a decoy for the real Roth, and asks the woman if she thought the Shadow Broker was the only one with agents like herself. The woman calls Roth a fool and says that he needs to be put in his place, once she takes care of his decoy. They fight, with the woman initially gaining the upper-hand by slashing the man in the back and disarming him. The man pulls out a gun and manages to shoot the woman in the torso as she dives behind a couch.

Slowly, the man approaches the woman, asking the woman why the Shadow Broker is so desperate to kill Roth even though Roth has done nothing to provoke the Broker's ire. The woman counters that Roth is funding a pro-human terrorist organization: Cerberus. When the man disputes calling Cerberus a terrorist group, the woman tells him to try explaining that to the families of the turians who died on a freighter that Cerberus recently blew up. The man claims that the turians on that ship were slavers, and it isn't terrorism to protect humanity from such people. Deriding the woman's affiliation with the Shadow Broker, he declares that at least Cerberus stands for something. As he prepares to finish off the woman, the man is distracted by a cry for "mommy" made by the boy she had left at the clinic. She throws her knife into the man's chest, sending him reeling, then shoves it deeper and removes it.

As the man lies bleeding profusely on the floor, the woman demands to know where Roth has gone before she kills him. The man refuses, believing she wouldn't kill him in front of her "son". She explains that the boy isn't her son and asks again for Roth's location. The boy interrupts her, telling her that she can't kill the man, but she replies that sometimes the kindest thing that one can do is end it. She then stabs the man again. He relents and reveals Roth has left the facility and returned to Earth. The boy asks the woman if they can finally leave. She savagely kicks the man in the head, killing him, then says they can go.

As they depart Roth's quarters, the woman knocks out the guard and takes his hat and armor to conceal her wound. They make their way to an administrator working at an information desk. The woman takes on the guise of a security officer, explaining to the administrator that she is investigating a break-in and murder at the Roth residence and needs to know where Roth has gone. The administrator brings up the information on his computer and answers that Roth had left the day before, but did not specify any destination. The woman and boy leave, ignoring the administrator's offer to call the facility's main office and inquire further.

Arriving at a ship, the woman opens its boarding ramp with a key card, triggering the response "Access granted. Welcome back, Miss Brooks". The boy asks the woman if that is her name, but she shrugs off the question. When the boy says that he's coming with the woman, she firmly tells him no, that she will not be responsible for him. The boy pleads with her, insisting has no family or future at the mining facility and only wants a ride to somewhere else. The woman explains that she works alone because people can't be trusted; if she took the boy with her and he was captured, his captors would inevitably find a way to make him betray her. The woman gives the boy the hat she took earlier and notes that he was clever enough to track her and sneak into Roth's quarters, so she knows he can manage to find a way off the asteroid on his own. Turning away, she wishes him luck. 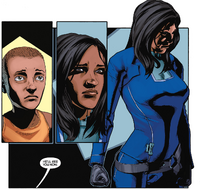 The boy draws a gun and shoots her in the back, mortally wounding her. He places the hat back on her head and reveals that he is a girl, not a boy. The girl explains that she already knew that people could not be trusted, but she had hoped she could trust the woman; now she knows better. The girl boards the ship and leaves the woman behind to die.

Years later, the girl has grown up. Calling herself "Rasa", she gains a meeting with the Illusive Man. He asks her why she chose to join Cerberus. She answers that a man she once knew said that Cerberus stood for something, and that she wants to stand for something too.

Retrieved from "https://masseffect.fandom.com/wiki/Mass_Effect:_Foundation_1?oldid=482410"
Community content is available under CC-BY-SA unless otherwise noted.