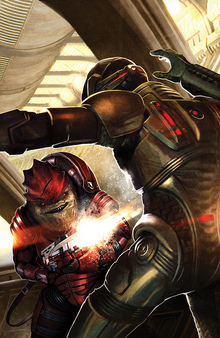 Urdnot Wrex—one of the most dangerous mercenaries in the galaxy—crosses paths with a mysterious secret agent in this explosive adventure![1]

Rasa is reviewing a dossier on Urdnot Wrex when she gets a call from Kai Leng, who informs her of a complication to her upcoming mission. Her target is being hunted by Wrex, and she assures the assassin she has got it covered.

Rasa infiltrates the Citadel in disguise. She is able to get a head start on Wrex due to the krogan being waylaid by C-Sec, who suspect he's carrying contraband. Leng tells her over the radio that he would've dealt with Wrex instead of delaying him but Rasa smugly reminds him that's why she's on the mission and he's not. As she takes a cab to the 700 Block, Kell Residences, Leng asks what if the krogan arrives before her. Rasa vaguely hints that he won't.

Wrex soon gets into a confrontation with a gang of batarians and turians, who claim to have a bone to pick with him. Wrex then surely and swiftly incapacitates them all. As he walks away, he is approached by a volus who remarks that "the shrines of the Enkindlers" are nice to visit. Wrex identifies his contact through the code phrase uttered, and answers that he would love a tour.

As they walk through a waste disposal area, the volus informs him that someone is determined to not let him reach his target, proof being the C-Sec officers and thugs earlier. The volus then opens up a closet full of weapons, to Wrex's delight.

As Wrex inspects the weapons, the volus then explains that the Shadow Broker is unsure of who this interloper is, so he's not taking any chances. Wrex is then instructed to perform his job away from the Presidium, as it would cause far too much attention should he cause collateral damage. The volus hands the krogan his target's address and warns that should anything go wrong, then their quarry would go into hiding. Wrex remarks that he shouldn't miss.

Meanwhile, Leng is tracking the target, Fist, from afar. He warns Rasa that Fist is on his way home with his bodyguards. Rasa is in the process of infiltrating his residence masquerading as maintenance to steal his files so Cerberus can turn him against the Shadow Broker, but then she spots a giant explosion nearby. Leng guesses that Wrex must be going after more mercenaries she sent after him. 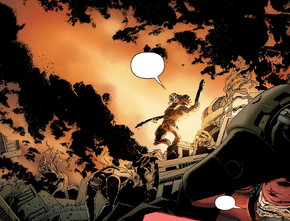 At the sight of the carnage, Wrex is going ballistic when he is suddenly shot in the chest. Getting back up, he sneaks up on an armored human and shoots him in the back. As he holds his captive at gunpoint, the human takes off his helmet and identifies himself as his friend Jasox, who confesses that he was only sent to slow him down.

Wrex expresses hesitancy over what to do with him, and Jasox reminds him of the debt he owes for saving him from a burning ship. As they walk away from the carnage, Wrex reminds Jasox that he was only in that burning ship because Jasox showed up late, forcing him to fight the entire crew by himself. Jasox then tries suggesting they take a drink, but Wrex easily guesses this is another ploy to delay him, so he walks away.

Leng remarks that Rasa's plan to stall Wrex is working. However, Rasa discovers that Fist had defected to Saren Arterius for reasons yet unclear. Leng insists she get out of there, but Rasa intends to stay a while longer. She then calls C-Sec, screaming hysterically that a krogan is threatening her outside her apartment. Fist, however, arrives earlier than expected, though Rasa recovers soon enough and catches the crime lord off guard. 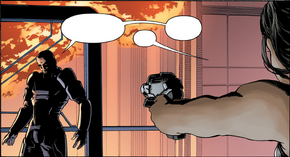 Holding him at gunpoint, she demands to know why he reneged on his deal for asylum with Cerberus in exchange for the Broker's secrets. Fist merely claims that Saren made him a better offer. He then takes note of Wrex approaching the building, initially mistaking the krogan to be Rasa's ally, though Rasa soon informs him what the bounty hunter's purpose is. She offers to protect him in exchange for his information. Caught between waiting for Wrex to get to him or dealing with Cerberus, Fist suggests on a third option.

Wrex arrives at Fist's residence, using a grenade to take out Fist's krogan bodyguards upon reaching the twenty-first floor. He bursts inside the room, only to find that his target had already fled. He informs his contact of Fist's disappearance, but he promises to find him. He shares the elevator ride down with Rasa, unaware of her involvement in the matter. When they arrive at the ground floor, they find a C-Sec squad waiting for him.

Later, back on her ship, Rasa sends Fist's data to the Illusive Man, who is impressed by it but remarks that he would've wanted Fist brought in. The Illusive Man praises her mission performance, though he poses the question of why she let Fist escape. Rasa explains that she wanted to find out more about his connection to Saren, and that she can't do that if he's dead. The Illusive Man asks if she's not worried that Fist would sell Cerberus out, and Rasa answers that Wrex would probably kill him first. The Illusive Man then asks why she helped bail the krogan out past C-Sec, and Rasa confesses that she liked him: according to her, he is straightforward, honest and uncomplicated.

Retrieved from "https://masseffect.fandom.com/wiki/Mass_Effect:_Foundation_2?oldid=482411"
Community content is available under CC-BY-SA unless otherwise noted.