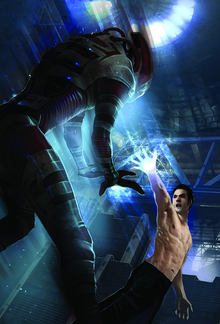 Far away from Earth, on Gagarin Station—or "Brain Camp," as its students call it—a young Kaidan Alenko undergoes his biotic training. During an exceptionally grueling lesson, Kaidan steps in to defend the lovely Rahna from the brutal Commander Vyrnnus—but his rash actions have tragic consequences![1]

A young cadet by the name of Kaidan Alenko monologues about the Mars ruins and the Charon Relay discoveries, thinking that despite all the outward knowledge made available to humanity people still have much to discover about themselves. The year is 2168, and Kaidan is a student at Jump Zero undergoing the Biotic Acclimation and Temperance Training program. 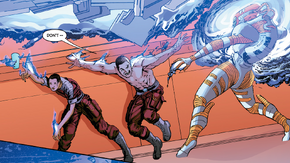 One day, one of his friends passes along a message that their peer Shelby has rigged up a transmitter for sending messages back to their families on Earth. BAaT students aren't allowed outside contact - regardless, Kaidan brings along his close friend Rahna with him to Shelby's place for the clandestine activity.

The next day Kaidan and Rahna are on meal break lining up for drinks and discussing what happened the previous night. Their instructor Commander Vyrnnus appears at the mess hall and orders the cadets to proceed to the training room ASAP. Unwilling to cross a teacher with a brutal reputation, the students scramble to obey. In the training room the kids find a pile of building material and Shelby tied to a post, eliciting looks of horror from some of them.

Vyrnnus proceeds to berate the students for treating their education as a joke and points to Shelby as an example. The turian asks around if anyone knows what the cadet is up to, and when no one stepped forward he unties Shelby to join his peers and begins explaining the purpose of the blocks. The students are to biotically assemble the blocks under pain of starting over if mistakes are made.

The exercise goes on for several hours and students start dropping out of exhaustion. Rahna begins to falter, but Kaidan manages to save her piece from falling. Vyrnnus notices the gesture and begins to taunt Rahna with a glass of water, floating it within her reach. Rahna falls for the bait and the turian biotically breaks her arm, sending Kaidan into a biotic rage that knocks the Commander backwards.

Vyrnnus gets back up and lunges at Kaidan in the opening moments of their biotic duel. Later, the turian draws his knife and slices Kaidan on his right side. In retaliation, Kaidan lets another powerful biotic blast loose and jumpkicks the Commander in the face while he's down, ending the fight. The rest of the students look on in horror at the turn of events, and when Kaidan tries to approach Rahna she rejects him, utterly terrified.

During his departure from BAaT Kaidan pleads with his guards in vain for a minute to say goodbye to Rahna, though when she shows up, the guards allow him his moment. The minute quickly passes with Kaidan and Rahna's relationship nowhere near repaired, so when the guards press Kaidan his temper gets the better of him. Kaidan returns his attention to Rahna, only to find her waving a final goodbye and walking away.

One month after the incident with Vyrnnus, Kaidan is back on Earth where his father points out to him that even right choices have consequences.

Many years later Kai Leng visits Rasa in her quarters, checking in on the agent for missing her usual debrief. Rasa spent all night studying dossiers of Commander Shepard's crew and angrily vents how pointless it is learning about the various issues of the crew, insisting that Cerberus should focus their efforts on learning more about the Commander. Leng dares her to suggest her ideas to the Illusive Man, and departs reminding her not to miss the next debriefing. Glancing at Kaidan's profile, Rasa assures him she won't.

Retrieved from "https://masseffect.fandom.com/wiki/Mass_Effect:_Foundation_4?oldid=482413"
Community content is available under CC-BY-SA unless otherwise noted.