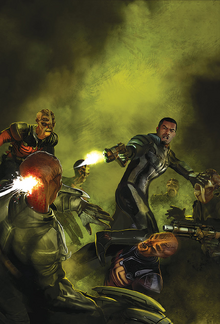 Jacob and Miranda's mission takes a deadly turn as the duo find themselves in the gun sights of a vicious batarian warlord![1]

The street urchin Jacob helped earlier wanders the streets, eyeing leg meat being served on a stand. Its batarian proprietor refuses to give her a free one and confiscates her credits when she tries to pay, accusing her of stealing the money. She tries to argue, but her attention is grabbed by something incoming. She jumps out of the way as a particularly large debris from Miranda's Cerberus ship smashes into the stall, killing the batarian. She picks up the leg meat and starts munching it when a batarian carrying an unconscious Miranda orders her to get her uncle, shoving her in the process and stomping on the meat.

The batarians dump Miranda in front of Torthak, a warlord currently in talks with Miranda's ruddy batarian contact. He takes the opportunity to stab his fellow batarian in the back, and the dead batarian's former underlings express indifference, just hoping Torthak won't be so eager to sell them out. Miranda assaults Torthak with a headbutt when the batarian crouches close enough to her, but is easily subdued afterward. One of Torthak's new minions, Taleed, arrives at the scene, and the batarian puts him to work. 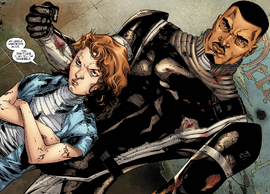 Meanwhile, an injured Jacob wanders around loudly asking passersby for his partner's whereabouts. A gang of would-be hoodlums led by a salarian takes note of his condition, but the street urchin interferes and threatens them with her uncle's reputation. She tells Jacob she knows where Miranda is but she's concerned about Jacob dying at her captor's hands. The urchin's mother calls her by name, Lakshmi, and demands to know who she's talking to. Seeing Jacob's injuries, Lakshmi's mother orders her to get a bed ready. Jacob expresses gratitude but the woman replies she wants something more than money in return.

Jacob hears out the woman's problem as he recuperates in their hovel. Lakshmi's uncle traded his own wife (the woman's sister) and kids to slavery in exchange for gang membership, and Lakshmi's mother wants them back. Jacob promises to do so, but needs supplies for the operation. In response, Lakshmi shows him the place where her uncle keeps his weapons. 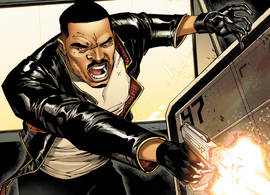 Now dressed and armed, Jacob heads to the place where slaves are kept, with Lakshmi leading the way. Lakshmi peeks inside through the upper windows, but spots her uncle, Taleed, receiving orders to kill Miranda. Jacob advises the girl to head back while Miranda is being challenged by Taleed to draw the knife from the dead batarian backstabbed earlier.

Miranda instead covers her ears as a flashbang detonates in close proximity. Jacob storms the place and scores at least three headshots with his M-4 Shuriken. Taleed swings an arm at Jacob, misses, and gets kneecapped in the counterattack. Miranda pulls the knife and moves to kill Taleed, but Jacob prevents her from doing so. Instead, Jacob threatens Taleed with death by Miranda's hand if he doesn't divulge where the slaves are kept. Taleed complies and is pistol-whipped into unconsciousness as the partners move on to rescue the slaves.

At the warehouse's exit they're stopped by the sight of Torthak holding Lakshmi hostage. Miranda insults his capacity to kill kids, and while Torthak's attention is on her Jacob puts a bullet through his chest. With Lakshmi's aunt, Kali, and her cousins safe, Lakshmi hugs Jacob afterward and gives Miranda a yellow rose in gratitude before running off.

Jacob and Miranda discuss their own mission's aftermath, with Miranda disapproving of Jacob's unnecessary risks but approving of his rescue nonetheless. As for finding Commander Shepard, Miranda simply confirms that the body is already long gone from the planet, having been sold to another bidder. Jacob softens his ambivalence on joining Cerberus, but with their transport gone Miranda gives him until their extraction to make up his mind.

Retrieved from "https://masseffect.fandom.com/wiki/Mass_Effect:_Foundation_6?oldid=498877"
Community content is available under CC-BY-SA unless otherwise noted.