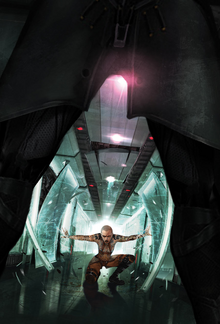 When elite Cerberus agents are ordered to capture a powerful and dangerous rogue biotic, they are completely unprepared for the fury that is Subject Zero—better known as Jack![1] 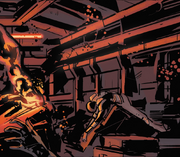 Dr. Angersol frantically comms for backup when the doors to his office are demolished by sheer biotic power. Jack steps inside and executes the doctor, a figure from her Subject Zero past. The Illusive Man appears before her via hologram, attempting to reason with her, but Jack would hear none of it.

At a remote Cerberus outpost elsewhere, Kai Leng hooks in Rasa for a mission. A Cerberus training facility is under attack, and the Illusive Man dispatches them both to retrieve the perpetrator, Jack: dead or alive, through whatever means necessary.

Leng and Rasa arrive at the training facility a short time later, finding huge swathes of destruction in Subject Zero's wake. The presence of multiple people out to get the target makes Rasa think about Jack's possible origins and the threat she poses. Leng simply suggests they should find her before the others - the Blue Suns mercenaries - do.

With the facility in lockdown, Jack makes her way to its main reactor. She comes across a bald man claiming to be a biotic trainee of the facility. The man doesn't know where the reactor is, but he takes her to his fellow students when she orders him to. The man claims to have had a better life under Cerberus tutelage, but Jack's own experiences with the organization tells her otherwise. On finding the other students she gives them a chance to learn the truth behind Cerberus by escaping with her, or stay and keep hoping that Cerberus is as benevolent as it seems to be.

A good number of the students follow Jack as they try to make it out of the facility. A trio of Blue Suns mercs block their way, so Jack orders the students to sneak across while she presents herself as a diversion. 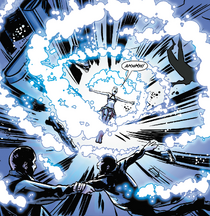 Rasa and Leng arrive behind Jack when she's done bringing down the ceiling on the mercs. Brandishing his sword, Leng gives her one chance to surrender. Jack responds by unleashing a powerful biotic blast on the Cerberus operatives. She warns Rasa to stay down, but Leng is actually coming down on her from above. She senses it and biotically blasts the assassin again, this time hurling him higher up.

More Blue Suns arrive at the scene and open fire on Jack, forcing her to throw up a biotic shield. She sees the students she's with securely behind Blue Suns lines. Enraged at the turn of events she starts making everything in the vicinity fly. Unfortunately, a krogan merc sneaks up from behind and docks her at the head, knocking her unconscious.

The merc picks her up and hauls her away, to the Cerberus agents' consternation. The Illusive Man can still have Subject Zero, but the krogan wants triple the usual pay for all the losses he has incurred. As Leng and the students recover from the turn of events he chalks up the post-mortem as a "colossal waste of time", but Rasa begs to differ: at the very least, the Illusive Man will now know what Jack is capable of.

Retrieved from "https://masseffect.fandom.com/wiki/Mass_Effect:_Foundation_7?oldid=482417"
Community content is available under CC-BY-SA unless otherwise noted.