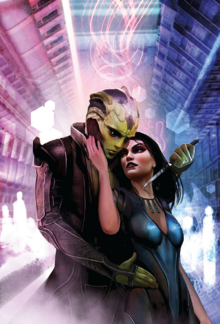 Disgraced after the failure of her most recent mission, Cerberus agent Rasa receives a chance at redemption from the Illusive Man. But is it absolution she will find at the hands of the assassin Thane Krios—or damnation?[1] 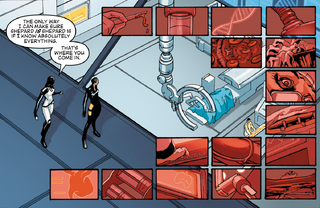 The Illusive Man receives word of Kai Leng and Rasa's failure to retrieve Subject Zero, refusing their apologies and admonishing them not to let it happen again. Leng throws a fit as soon as the transmission ends, freaking out on his perception of an ugly fate that awaits them when they land. She tries to point out the mission's technical success and the futility of whitewashing their deeds, but Leng then accuses her of gloating at the humiliation he received during the battle against the biotic. Message beeps interrupt their argument, and Leng complains on Cerberus's impatience.

Minutes later at the Minuteman Station, Miranda Lawson greets the newcomers with a new set of orders for each of them. Rasa is to retrieve her stuff from the shuttle and report to the labs, while Leng is instructed to get back up and allow agent Dawkins to take him to the Illusive Man. Both orders are to be done immediately, so as Rasa tries apologizing to Leng he threatens her instead of dire consequences should they ever pair up on a mission again.

Rasa learns about the Lazarus Project when she meets with Miranda at the labs. Much of the intel she gathered about Shepard were invaluable to the project, and Miranda allows her to see the ongoing developments: Shepard's backup clone, Shepard's reconstruction, and screens of everything Cerberus has on Shepard. Despite progress on the clone, the Illusive Man still wants the real thing. Miranda wants to make sure Shepard is Shepard by knowing absolutely everything there is to know about the person. To those ends, Miranda reveals to Rasa her part in the project: she is to steal the Commander's classified files from the Spectre offices at the Citadel. 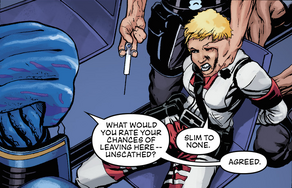 Miranda hands Rasa a disc containing highly-classified but outdated Cerberus secrets. The ploy is to give the disc to the Spectre Tela Vasir, who should grant her sanctuary at the Spectre offices where she could manually download Shepard's files. Rasa poses as a Cerberus defector at the Citadel a few days later, wearing lightened skin and a blonde wig, and approaches Vasir with a demand for her safety in exchange for the data. Vasir acquiesces and leaves her at a Spectre office, taking the disc for verification. Rasa sets to work upon the asari's departure, but it turns out the Spectre suspected treachery and returns with armed guards.

Vasir sees through Rasa's deceptions and forcibly undoes her disguise. Because the Spectre obtained the Cerberus agent's prints and DNA, one word from her will cripple Rasa's use as an infiltrator. She blackmails Rasa into doing her bidding, which is to return to the Illusive Man to deliver the Shepard files. Vasir tainted the data with a virus that should force the Cerberus leader to give in to her demands, and Rasa is given a choice between prison and betraying Cerberus.

Hours later at a bar, Miranda resumes contact with Rasa, who dropped out for a while, and receives confirmation of a mission accomplished. Rasa reflects on her day's troubles when she's offered an anonymous drink. She drains it before realizing it has been spiked. Severing comms with Miranda, she stumbles out of the bar and into the Presidium, where a turian C-Sec cop mistakes her for a drunk. An anonymous person gets her out of the guard's clutches, claiming responsibility for her before setting her down in a deserted alley. This person is none other than the assassin Thane Krios, who crouches at her with bared knife.

Rasa groggily blurts out that she didn't want to die because she has never lived her life. Thane studies her for a moment and decides to believe her, explaining that it appears he was misinformed of her purpose. He apologizes for her condition and carries her off, praying to Kalahira to give her guidance. Rasa remembers some words people said in her immediate past, and their figures present themselves in her awareness: Leng, Fist, Vasir, Ashley Williams, the original Brooks, Urdnot Wrex, Kaidan Alenko, and Miranda.

A few days later, Rasa arrives at Minuteman Station on a gurney still weakened by the ordeal. She tries to warn Miranda about the virus, who retrieves the disc and urges her to focus on recovery. It takes a few more days for Miranda to extract the data and counteract Vasir's virus, but in the end Rasa completed her mission.

The Illusive Man is pleased with the developments. He supposes that Vasir and her cohorts will have been alerted to Cerberus's interest in Shepard, and reminds Miranda to ensure the Lazarus Project's success. The clone project is allowed to continue in a testing capacity as priority still lies in restoring the real Shepard. In passing he writes off Rasa's near-death experience as troubling, and he agrees with the assessment that the agent's field days are over. He assures Miranda he still has a purpose for Rasa, drawing up the dossiers for Shepard's prospective team.