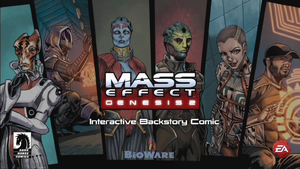 Genesis 2 fills the role of Mass Effect and Mass Effect 2 for new players to the series, introducing them to the story of the first two games in the Mass Effect trilogy and allowing them to make some of the major plot decisions that players could make by playing through the previous games (see Save File Transfer). The player is prompted to begin Genesis 2 after character creation, but using it is optional. There are two versions of the comic, one each for a male and female Commander Shepard.

The following shows the results of the Suicide Mission with respect to the choices made via the Genesis 2 Interactive comic.[6] [7]