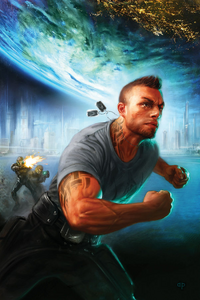 Each issue will star one of the main characters of Mass Effect 3 in a story written by the BioWare writer who wrote that character in the game—beginning with a Mac Walters-penned tale of brash young gun James Vega![1] 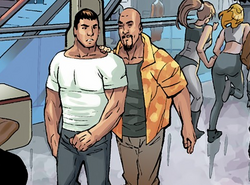 Days after the Reaper invasion of Earth in 2186 CE, millions of people are fleeing to the safety of the Citadel. While the Normandy SR-2 is docked there, James Vega seeks out his family. A Citadel official informs him that there is no available information on Emilio Vega or Josh Sanders, James's uncle and father. As James approaches a terminal and is asked for to verify his identity, a flashback takes him back to ten years earlier.

A younger James Vega enlists with the Systems Alliance marines at Camp Pendleton in 2176, shortly after the Skyllian Blitz. His uncle Emilio tells him that it's a good first step and he must walk his own path, but James fears his father Josh will be upset. Upon returning to his father's home in Solana Beach, Josh confronts James about his absence, saying that he had been messaging James all day and needed him to pick up something. When Josh notices Emilio, he becomes enraged, warning Emilio that he was not supposed to come near his son. Emilio tries to calm Josh down, but Josh accuses him of trying to turn James against him like he did with James's mother. Josh slams the door before yelling at James for being ungrateful.

Later, James arrives at a pharmacy in San Diego to pick up Josh's package. When the man behind the counter sees James flash a blue chip, he demands that James leave the store, calling him a junkie. Outside, a dealer approaches him and chides him for going in the store, then asks for the chip in exchange for the package.

As James leaves, the dealer suddenly rushes past him, fleeing police. The dealer escapes on a three-wheeled motorcycle while James is forced to knock out the pursuing officer to get away. James encounters an elderly woman having difficulty entering her apartment building because the door's security system won't accept her identification chip and helps her, then enters the building himself and flees to the building's roof. A police drone spots him and orders him to submit, but James leaps onto it and forces it to crash to the ground. He slips into a nearby restaurant and dons an apron and hat to blend in with the staff.

Finding a comm terminal, James calls first his father, then his uncle for help when his father doesn't answer. At that moment, an officer enters the restaurant with a blurry surveillance photo of James and asks customers if they have seen the man in the photo. The officer turns to James, but does not recognize him.

Hours later, James returns to his father's home and asks Josh about what was inside the package. Josh says that James already knows, then opens it, revealing dozens of small packets of a red powder. As James declares that he's leaving, Josh inhales the powder and tells him that he'll be Josh's errand boy and the military won't accept him once they find out about James's actions that night. Dismayed, James lashes out at his father, but Josh repels him with a biotic punch and threatens to tell Emilio what James did if he ever defies him again.

Emilio finds James sitting on the beach in front of his house. He tells James that he had promised his mother to look out for him before her death, but now James has to choose how to live his life. James thinks it is too late because of what his father said, but Emilio calms him down and points out that Josh would never tell the military that he had contacted a drug dealer and solicited the aid of a minor in purchasing drugs. Josh can't do anything to James unless James lets him. Only James can choose what happens to him now.

Back in the present, James is stirred from his reverie by Liara T'Soni. As they head back to the Normandy to depart the Citadel on a mission with Commander Shepard, Liara assures him that he'll hear something about his family soon and wishes him luck. James thanks her, saying he'll need it.

Retrieved from "https://masseffect.fandom.com/wiki/Mass_Effect:_Homeworlds_1?oldid=482236"
Community content is available under CC-BY-SA unless otherwise noted.