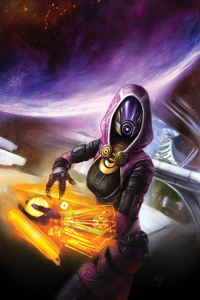 Mass Effect: Homeworlds turns the focus onto Commander Shepard’s ally Tali’Zorah in a story from Tali’s Mass Effect 3 writer Patrick Weekes! On a mission to end her people’s generations-long exile, Tali uncovers the treachery of a central Mass Effect figure and finds herself hunted by assassins. Fleeing to the Citadel for help, she instead encounters disgust and discrimination in the most “civilized” place in the galaxy![1]

The year is 2183. An injured Tali'Zorah nar Rayya limps her way into a clinic on the Citadel, calling for help but receiving no assistance in return. She collapses at the hands of a doctor, musing to herself how her Pilgrimage had gone horribly wrong. 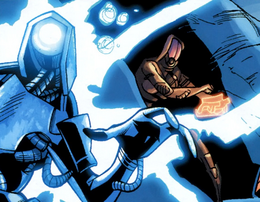 She had begun her Pilgrimage by taking the quarian ship Honorata to travel to Illium in search of something she could bring back. Keenah'Breizh interrupts her as she listens to a farewell message from her father and informs her that a geth presence has been detected on an unidentified ice planet in the Crescent Nebula. Tali and Keenah land, and Tali disables a geth to extract its memory core.

Upon activating it, she hears a recorded conversation between the Spectre Saren Arterius and Matriarch Benezia about a recent attack on the human colony of Eden Prime and the imminent return of the Reapers. Realizing the importance of this information, she convinces Keenah that they need to give it to authorities on Illium. Meanwhile, Commander Jacobus, a turian mercenary employed by Saren to excavate Prothean artifacts on the ice planet, is alerted of the quarians' intrusion and vows to hunt them down, knowing that if he fails, Saren will kill him and his team.

Tali and Keenah flee Jacobus and return to the Honorata, then travel to Illium. They are denied permission to dock for several days by the port officials, who are wary of allowing quarians to land. This inadvertently gives Jacobus and his men time to land on Illium themselves and prepare an ambush for the Honorata's crew. When the Honorata finally lands, the crew is attacked and killed. Only Tali and Keenah escape. Unable to return to the Honorata, they stow away on a transport ship bound for the Citadel. Upon arrival, the transport's crew discover the stowaways, and the captain decides to turn them over to C-Sec instead of killing them, claiming that as quarians they aren't worth the bullets.

In a detention cell, Tali and Keenah attempt to explain to Chellick that they have important information for the Citadel Council, but he ignores them and warns them to leave the station in the next day before releasing them. The pair query an Avina terminal about meeting with the Council, but are informed that there is a seven month wait for an audience, then told to move on by a C-Sec officer. Suddenly, Jacobus appears and attacks them, chasing them across the Citadel and into a maintenance area.

Tali is badly injured by one of Jacobus' shots, but Keenah is mortally wounded. They reach an incinerator and Tali spies catwalks they can use to get out, but Keenah collapses and dies. When Jacobus catches up to them and enters the incinerator, Tali seals the doors and activates it, destroying Jacobus, Keenah's body, and a computer that Tali had set to play her father's farewell message.

Arriving at the clinic, Tali is treated by the doctor who caught her fall, to whom she tells the story of her journey and the information she obtained from the geth. A volus mentions that he is an information broker and can contact the Shadow Broker to ensure that Tali's information can reach the right people. He encourages her to trust him and directs to a bar where she can hide out. Tali agrees and asks where to go, as her father's message plays over scenes of Jacobus' death, the Battle of the Citadel, the Human-Reaper, and Tali watching the sun from the surface of Rannoch.

Retrieved from "https://masseffect.fandom.com/wiki/Mass_Effect:_Homeworlds_2?oldid=482237"
Community content is available under CC-BY-SA unless otherwise noted.