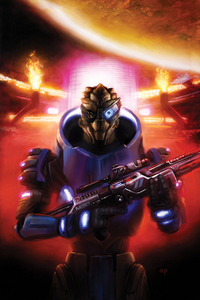 Mass Effect: Homeworlds returns with a brand-new tale of turian Garrus Vakarian, from Garrus’s Mass Effect 3 writer John Dombrow! Garrus has fought valiantly alongside Commander Shepard, but his time away from his home planet Palaven has seen crime and corruption take hold there, a contradiction that becomes clearer as he investigates the murder of a turian on Omega. Cutting to the heart of Homeworlds, Garrus must choose between fighting for the galaxy or protecting his home![1]

Many years ago on Palaven, a young Garrus Vakarian is learning how to shoot a sniper rifle with his father. When Garrus wishes to take a break, his father refuses until he hits the targets. Garrus misses again with his next volley and asks his father why he has to shoot if his aim will not improve. His father explains that if Garrus gives up now, when things are getting hard, then he won't make it anywhere in life. He is trying to teach Garrus how to shoot because as his father, it's his job to teach Garrus how to be an adult. Garrus takes aim once more and fires another volley.

On Omega in 2185, a batarian mercenary asks a human ally how many casualties they've lost. The human merc asks if he wants to know the total or those lost in the last hour, and remarks that the mercs aren't holding a siege, they're being massacred. When the batarian wonders aloud why they can't kill one man, the human replies that it's because the man is Archangel, just as the batarian is killed with a headshot. As he overlooks the approach to his base, Garrus begins recording what he believes may be his final words so that the people of Omega will know the truth about him and not the lies the gangs will use in their propaganda.

Garrus explains that the battle he is now fighting was set in motion years earlier. On Palaven, years after the target practice with his father, Garrus arrives at a hospital to see his mother, who was injured in a hit-and-run. Garrus reveals that he missed the shuttle for his study abroad trip so that he could take care of his mother while his father was away on the Citadel. Since the scholarship was for that summer only, he lost it and won't be able to qualify again. His mother becomes worried, but Garrus insists that if he left on that trip, he wouldn't be able to forgive himself. He realizes that he's an officer's son, and that's all he will ever be.

Several years later, Garrus is at a shooting range at C-Sec Academy. A turian officer informs him that Garrus' father cut a suspect named Kishpaugh loose. Garrus confronts his father, who admonishes him for making a weak case against the suspect. Garrus accuses his father of being out of touch with the level of criminal activity on the Citadel and is incredulous that he would have Garrus doing paperwork instead of shutting down supply channels for drug and gun smugglers. His father retorts that Garrus can't break the rules just because he doesn't like them; if Garrus can't fill out paperwork, then maybe he isn't cut out for the job. He tells Garrus to do things right, or not at all. 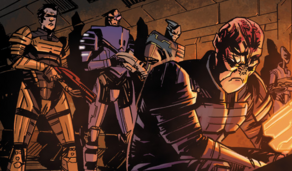 After the Battle of the Citadel, Garrus is disappointed when the public accepts the official line that the threat posed by Sovereign and the geth has ended and goes back to living as if the tragedy never happened. Frustrated with C-Sec's red tape, Garrus quits and goes after the drug smuggler Kishpaugh on his own. The smuggler reveals that his source is Omega. Garrus heads there, where he thinks he can actually make a difference.

Upon arrival at the station, Garrus stops a vorcha from mugging an elderly human couple, who thank him and call him a "real-life angel". At Afterlife, Garrus meets Sidonis and the two agree to form a squad to combat Omega's criminals. Garrus assumes the moniker of "Archangel" and spreads the word of what he's doing by going after thugs personally.

Before long, Garrus' squad expands to twelve members, including himself, Sidonis, a salarian explosives expert, a batarian tech expert, and various former mercs, security consultants, and C-Sec agents. Together, they declare war on Omega's criminals but are careful to avoid civilian casualties. Even when the gangs unite against Garrus' squad, they are unable to stop them. 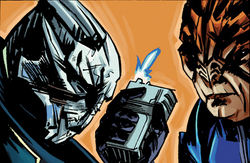 Eventually, the squad's success earns them a surplus of credits. Some members want to settle down and live comfortably, but Garrus pushes them to use their funds to hit parts of the station that were previously out of reach. Instead of listening to his squad, Garrus pushes them to their limits, hoping to completely purge Omega of crime.

At some point, Sidonis is captured by the Blue Suns and forced to trick Garrus into leaving the squad's hideout to strike an alleged Blood Pack gun running operation in the Kenzo District. Garrus finds no trace of the operation, and returns to the hideout just as the gangs bomb it and gun down the rest of his squad. Garrus remembers his arguments with his father and decides that he was mistaken to ignore what his father tried so hard to teach him.

Resigned to his fate as the gangs move in to kill him, Garrus contacts his father and apologizes. His father, realizing Garrus' situation, tells him to forget about that and to finish up his "target practice" then head back to Palaven so they can sort everything out. Through his rifle's scope, Garrus spots a familiar emblem on one individual's armor, and tells his father that he'll return home when he can because "the odds just got a lot better."

Retrieved from "https://masseffect.fandom.com/wiki/Mass_Effect:_Homeworlds_3?oldid=482238"
Community content is available under CC-BY-SA unless otherwise noted.