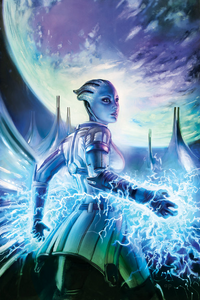 Mass Effect: Redemption’s Liara T’Soni returns to comics in a story by her Mass Effect 3 writer, Sylvia Feketekuty! Now controlling the resources of the Shadow Broker, Liara embarks on a galaxy-spanning mission to find information that can prevent the imminent Reaper attack. Her search turns up deadly secrets and brings her right to the beginning of BioWare’s latest blockbuster![1] 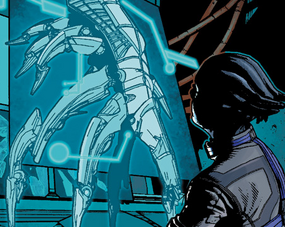 Having become the new Shadow Broker, Liara T'Soni struggles to find a way to stop the impending threat of the Reapers. Even with the vast resources now at her disposal, she worries that she will not be able to help. Liara contacts Admiral Hackett and informs him that she plans to continue seeking a solution from the Protheans and will start her search at Thessia. Unbeknownst to them, the Illusive Man watches the conversation from his lair.

At Thessia, Liara meets with a former colleague, Doctor Passante, who covertly brings Liara to a Prothean archive. Passante suggests that Liara should return to Thessia permanently and become a teacher; Liara agrees that sometimes all she can think about is coming back home, that it would be easier than her current life. Upon examining the archive, Liara is disappointed to learn how little it contains. Passante brings up rumors that Liara has been selling information on the black market and warns Liara that her passions may consume her in the same way they did Matriarch Benezia and lead to her death. Liara reassures Passante that she won't let that happen and asks Passante to trust the person she knew Liara to be. Passante suggests Liara investigates the Prothean ruins on Kahje and gives Liara her blessing.

Liara travels to one of the drell's domed cities on Kahje's surface and meets with a hanar official to discuss gaining access to a Prothean site. The official turns her down and explains that the site, a hanar shrine, is not open to visitors. Liara reiterates that her mission is scientific and not merely tourism, but the hanar directs her to other Prothean sites. Resorting to bribery, Liara implies that her organization might be willing to make a significant contribution to the upcoming Cresting Bloom holiday celebrations. The official's assistant, a drell named Quoyle, comes to Liara's aid and reasons that since generosity is an Enkindler virtue, Liara should be allowed to briefly visit the shrine if her contribution is generous enough. Liara says she cannot imagine what size of contribution could ever be compensation for a such a privilege; after a pause, the official offers to help her imagine that number. 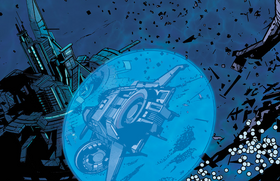 Quoyle takes Liara to the shrine, reminding her that if she tries to pull anything, he'll shoot her himself. Suddenly, Quoyle's craft is the target of a swarm of torpedoes launched by the shrine's defenses. Quoyle attempts to contact the shrine to call off the attack, but no one responds; in the shrine's control room, its drell staff lay dead while a Cerberus Phantom watches Quoyle and Liara's predicament on a viewscreen. Quoyle's craft is hit and begins taking on water, but Liara uses her biotics to push the water out and keep the craft in a bubble of air. Quoyle guides the craft to the shrine and compliments Liara on her powerful biotic display.

Once in the shrine, Liara and Quoyle discover the dead staff. They are attacked by the Phantom, who slashes Quoyle in the chest and incapacitates him. Liara fends off the Phantom with her biotics and kills her by driving a shard of debris through her head. Quoyle, wounded but alive, tells Liara to head to the archive room without him since he has seen it all before.

Searching the Prothean archives, Liara discovers encryption keys that unlock archives at three other sites. The first site is at an unknown location and the second was erased, but Liara recognizes the third. The Illusive Man then appears via hologram and greets Liara. He denies that he sent a Phantom to Kahje, blaming the attack on rogue Cerberus members, and asks Liara to trust him and work together to stop the Reapers. Liara agrees that this might be a mutually beneficial move, and asks the Illusive Man to share his information on stopping the Reapers first. When the Illusive Man doesn't respond, Liara surmises that he either wants to keep his information to himself or he doesn't have any.

As Liara leaves, the Illusive Man begins to taunt her, questioning her ability to run the Shadow Broker organization, and implying that black market sources think the Broker has become soft and vulnerable to usurpation. He asserts that Liara needs him. Liara counters by pointing out that he is the one trying to make a deal and tells him to send an army the next time he tries to kill her, then cuts the link.

As Liara helps Quoyle to the shrine's shuttle bay, Admiral Hackett contacts her and asks for an update. Liara explains that what she found isn't the solution she was looking for, but it might still be a viable lead. She asks Hackett for help gaining access to a top-secret facility on Mars.

Retrieved from "https://masseffect.fandom.com/wiki/Mass_Effect:_Homeworlds_4?oldid=482239"
Community content is available under CC-BY-SA unless otherwise noted.