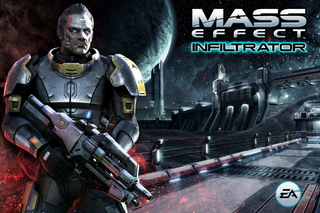 Mass Effect: Infiltrator was removed from the App Store in September 2015.[5] The reason for this has not been confirmed.

As of April 2018, Mass Effect: Infiltrator is no longer available from both Apple App Store and Google Play Store[6].

YOU’RE A CERBERUS AGENT – GONE ROGUE! As Commander Shepard battles Reapers across the galaxy, veteran Cerberus agent Randall Ezno procures aliens for illicit experiments at a secret facility. But when the Director of the facility goes too far - Randall fights back and vows to bring Cerberus down!

Can you fight your way off the hostile Cerberus base and deliver their secret research to the Alliance? 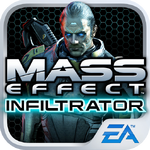 Mass Effect: Infiltrator is set somewhere in the year 2186 CE and occurs during the events of Mass Effect 3. Players take on the role of Randall Ezno, a Cerberus operative who begins to learn that the organization is not as benevolent as it appears to be.

After completing a mission on an ice planet, Randall returns to the Barn, a Cerberus research space station. On his way to visit his advisor, Inali Renata, something goes wrong and turian soldiers begin attacking the facility. During the attack, Randall tries to contact Inali, but she's cut off by someone. Randall hurries to Inali's location to ensure she is safe. After fighting past the turian invaders, Randall is shocked to find Inali suffering through horrific experiments at the behest of the Director of the Barn. Randall vows revenge and goes in search of the Director, now having to fight past the facility's Cerberus defenses.

While trying to escape, Randall is contacted by a mysterious voice via his earpiece. The voice claims to be a volus working with the Alliance. He tells Randall that if he can escape the facility and contact the Alliance, both he and Inali can be saved. Randall slowly makes his way toward the communications tower, fighting Cerberus troops, escaped test subjects, mechs, and X1, a massive, mutant krogan. Finally, he reaches the comm tower, signals the Alliance and heads to a nearby desert planet on a shuttle to await pickup.

After Randall arrives, Inali shows up, augmented beyond recognition, and starts to shoot Randall. After lowering her barrier and armor bars, the Director takes complete control of Inali for the remainder of the fight. In the end Randall either spares or kills Inali depending on the player's previous morality choices. He then vows to kill the Director for what he has done and leaves the planet. 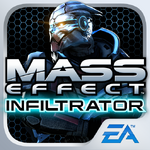 A bonus mission was released with the patch 1.0.3 that allowed players the chance to play as a turian experiment victim, trying to escape the medical bay.[8] Players are given a much more limited arsenal, making enemies much more difficult.

After his awakening and his liberation due to the actions of Randall Ezno and his volus ally, the turian shoots his way past Cerberus troops and other escaped test subjects in a facility transformed into a warzone. His run culminates in a confrontation with an Ogre Mech and an endless supply of Orcus Mechs. Eventually the turian reaches a large, empty room. Upon moving to the far wall, the turian sees the Director and several Cerberus personnel on the other side of a window. The Director laughs at the turian as a turret deploys in the room. With no available cover, the view fades to black. There is no escape.

Over the course of the game, players will collect evidence of Cerberus crimes and free prisoners from hostile Cerberus bases,[9] as well as have the opportunity to make Paragon and Renegade decisions.[10]

Mass Effect: Infiltrator is a third-person shooter where the player assumes the role of a Cerberus operative armed with a powerful arsenal as well as a variety of biotic and tech powers. During the optional bonus mission, the player also plays a turian prisoner attempting to escape the Cerberus facility. As the game is only available for iOS and Android devices, players must make use of touch-screen controls to aim weapons and deploy abilities while in combat.

Unlike other Mass Effect games, Mass Effect: Infiltrator does not feature a "conversation wheel" for dialogue choices. Randall's dialogue only exists in cinematics, quick exchanges during missions, and moral choice situations. However, these are short responses. Randall discussions with his allies and his enemies help the player to better understand the missions or the characters. The Turian subject has no dialogue.

Mass Effect: Infiltrator's campaign features a morality system that tracks the player's decisions over the course of the story. Randall Ezno will have the opportunity to make Paragon or a Renegade decisions, triggering different outcomes with specific actions. Depending on Randall's morality decisions, his scars and biotic abilities will vary from blue and red, and the story will also be affected.

Players can access the Store in Mass Effect: Infiltrator to purchase and upgrade new equipment and abilities for Randall Ezno. Items are unlocked by spending credits earned through gameplay. The Store is not available during the optional bonus mission.

Player performance is evaluated in three main categories. Players receive one, two, or three stars for each category:

Players also receive a medal for the completion of each checkpoint based on the total amount of stars achieved. Three types of medals are available: Rookie, Soldier, and Veteran.

The score earned by the player for a given mission is used to calculate the credits earned that can be spent on abilities and equipment in the Store. Missions can be replayed for additional credits or to increase mission ranks.

Completing the final mission of the main campaign also unlocks the Cerberus Escapees War Asset for Mass Effect 3. Two updates can be unlocked through gameplay to strengthen this War Asset:

Playing Mass Effect: Infiltrator can also affect the Effective Military Strength in Mass Effect 3 via the Galaxy at War system. Randall Ezno's actions during the game's campaign, such as gathering intel and freeing prisoners, can aid the Systems Alliance's war effort against the Reapers.

A free patch was released on April 22, 2012. It features an additional mission where player can play as an escaped turian experiment victim. Other changes include:

Note: The version of Mass Effect: Infiltrator on Windows Phone 8 is 1.1.0.0 but no changes are specified.

A patch was released on April 4, 2014 that optimized the game for the iPhone 5 and allows players to connect an external controller "for console-style gaming".