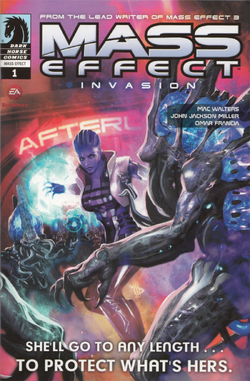 Mass Effect: Invasion is a four-issue comic mini-series published by Dark Horse Comics that follows Aria T'Loak, the Pirate Queen of Omega as her station comes under attack from a new threat unleashed by the human-survivalist organization Cerberus.

The series is written by BioWare lead writer Mac Walters, scripted by John Jackson Miller, and drawn by Omar Francia, with contributions from cover designers Massimo Carnevale and Paul Renaud.[1]

A limited edition of the first issue of this comic, with unique cover art, is included as part of the Mass Effect 3 N7 Collector's Edition.[2]

On April 4, 2012, Dark Horse released a trade paperback that collects all four issues along with Mass Effect: Conviction.[3]

In May 2021, BioWare included the Collectors' Edition cover version of issue #1 in a bonus content download featuring items from Deluxe versions of Mass Effect 2 and Mass Effect 3. It is only available until May 31, 2021 or until download limit is reached.[4]

Retrieved from "https://masseffect.fandom.com/wiki/Mass_Effect:_Invasion?oldid=528243"
Community content is available under CC-BY-SA unless otherwise noted.