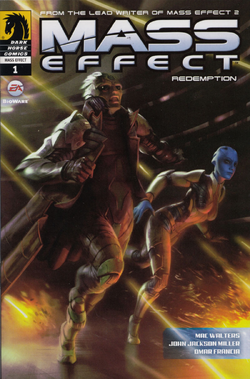 Mass Effect: Redemption is a four-issue comic series that explores some of the key events leading up to Mass Effect 2. Its narrative "picks up just as Commander Shepard disappears and is left without the support of the crew on the SSV Normandy in the lawless Terminus Systems. Shepard must fight for survival, and will be assisted by close companion, Dr. Liara T'Soni, to come home alive."[1] Liara's adventure is an extended storyline with major ramifications for the Mass Effect universe, and exposes readers to some of the new aliens, locations, and factions introduced in Mass Effect 2.

The Mass Effect 2 Limited Collectors' Edition comes bundled with a complete issue #1, while all editions of the Prima Official Game Guide include a five-page teaser. The Collectors' Edition issue has an alternate cover also made by Daryl Mandryk, while the standard image of Liara in a combat stance is found on the back cover. On June 9, 2010, Dark Horse released a trade paperback that collects all four issues and a "special behind-the-scenes section with sketches and more" in one 96 page volume.[3]

In May 2021, BioWare included the alternate cover version of issue #1 in a bonus content download featuring items from Deluxe versions of Mass Effect 2 and Mass Effect 3. It is only available until May 31, 2021 or until download limit is reached.[4]

Mac Walters has stated that the comics comprise part of a larger vision for the franchise: "The idea is that we're both expanding on characters that we didn't really explore in Mass Effect 1 and also looking at opportunities to expand on them even further in the DLC."[5] According to John Jackson Miller, Redemption does not assume any specific Shepard to be canonical: "Particular care was taken in the handling of Commander Shepard's character; as with the KOTOR comics and Revan, the story accommodates the reader's past decisions as a player."[6]