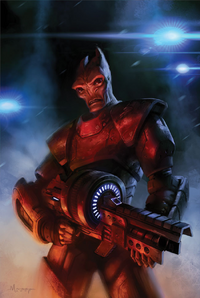 Liara T'Soni searches Omega -- the most dangerous space station in the galaxy -- for clues that could save Commander Shepard, humanity's greatest hero![1]

Miranda interrupts Liara's flashback of the destruction of the Normandy, and informs her that a mercenary group called the Blue Suns had been the ones who attacked her and Feron earlier. Miranda assumes that the body must still be on Omega since Cerberus would have found out if someone had left with it. The agent then suggests that Liara needs Feron's help to find Shepard and leaves the pair in an unknown area on Omega. Liara immediately hits Feron with a biotic attack saying that she knows he has been working for the Shadow Broker and accuses him of selling her out to the Blue Suns. Feron replies that he has worked for the Shadow Broker in the past, taking odd jobs from him, and admits to having been told to lead any friends of Shepard astray (of course no one had told him about the merc group).

The drell suggests finding the dead body on her own, but Liara protests stating that since she had paid him, and that even though they were doing a job for Cerberus, helping her also gives him a chance to redeem himself (and redeem herself as well for being so helpless to save Shepard in the first place).

The pair then return to the Afterlife club to meet the illustrious Queen of Omega: Aria T'Loak, since no one knows the station better than she. After Liara pelts a rude batarian and volus, Feron blackmails one of Aria's guards to let them see her. Aria is at first reluctant to give the two any information until Liara tells her that the Collectors are the ones interested in finding Shepard; since the Queen did not know this piece of information she tells them that the deal is going down in the lower levels of Omega, in an old mining plant.

Liara and Feron arrive at their destination only to find a large group of Blue Suns Mercenaries along with an unfamiliar ship docking near them. Feron starts to shake up once a salarian named Tazzik exits the mysterious ship to talk with one of the mercs. Taz is apparently the Shadow Broker's one and only hit man who is called in rarely when the Shadow Broker really wants something or someone taken care of (he is the man to go to for results and usually he gets them, as stated by Feron). The salarian and a krogan merc stand in front of what appears to be a case holding Shepard's corpse.

Liara flares up her biotics upon realizing that Shepard is so close by, but the drell states that it is too risky. Mistaking his attitude for cowardice she tells him that she will not run now that she has come so close to finding the Commander. Liara is afraid that Feron will switch sides and vows not to let him out of her sight in case he is given a better offer. Feron brushes her off and suggests that they use one of the old defense guns to gun down Taz's ship so that they may not escape; Liara agrees.

Unfortunately, Feron misses his target, hitting some cargo behind the ship instead. The mercs shoot in their direction while Liara moves forward to take out a few men, heading towards Tazzik himself. Taz then fired a grenade at Liara but Feron pushes her out of the way at the last moment. Liara angrily shoves the drell off of her only to watch helplessly as Taz's ship leaves Omega, presumably with Shepard's body inside.

Retrieved from "https://masseffect.fandom.com/wiki/Mass_Effect:_Redemption_2?oldid=517427"
Community content is available under CC-BY-SA unless otherwise noted.