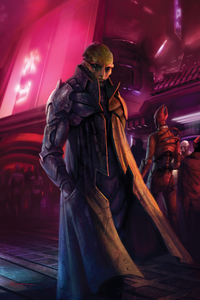 Liara T'Soni finds herself both pursuing Commander Shepard's abductors and on the run herself as Mass Effect: Redemption nears its explosive conclusion-revealing secrets crucial to the story of Mass Effect 2 along the way![1]

Liara angrily approaches Feron with biotics ready, accusing him of still working for the Shadow Broker and purposely allowing Tazzik to escape with Shepard. The drell states that in the eyes of the Shadow Broker, he never stopped working for him so they could use that to their advantage to find the corpse. Feron does not want the body to go to the Collectors and offers to use his ship to tail Tazzik; Liara agrees. The scene shifts to Miranda, on her own ship, witnessing Tazzik leave with Shepard. The Illusive Man cautions patience, deeming it equally important that they discover the reason why the Collectors want the body as much as retrieving it, informing her he has other assets, unknown to her, involved.

Feron, who has taken Liara on his notably small ship (which Liara presses as having no second chair and teasing him about not being paid enough), pilots towards the Mass Relay that Tazzik took stating that there is only one planet in that sector which the Shadow Broker uses for transport: that world being Alingon. After going through the relay, the pair is attacked by three sentry ships sent by the Shadow Broker. Feron knows his way around this system and leads the three ships to their demise by navigating through some mined-out asteroids in the system.

Liara and Feron land on the planet as the asari contemplates why she cannot get a communications signal at all. Apparently the Shadow Broker is the only one with the technology to bypass the electromagnetic shroud emitted naturally by the planet, but his facility is the only one that can do this so all agents have to report in person. If any agents wish to make a call themselves then there is another layer of protection, so that nothing can be traced (hence why the two were attacked since their arrival was not warranted).

Two turian guards stand outside the building as Feron approaches with Liara as his 'captive.' The drell, who apparently knows the turians very well, manages to charm them with his words to let him inside despite not having been on the Shadow Broker's list. Feron mentions that this facility is only used for 'special business' and manages to find a volus leading a Collector to the body. Liara wishes to immediately attack the Collector, but the drell holds her back saying that he used to think the Shadow Broker was a neutral man but by siding with the Collectors he distrusts him and wishes to know why they would want Shepard's body. The pair enter a room where Feron states is the 'source' of information in the building; suddenly they run into a shrouded image of the Shadow Broker himself.

Liara desperately tries to persuade the Shadow Broker that helping the Collectors is wrong, but he replies that it was merely a good business deal, one too good to pass up. Feron tells Liara to stall him as he hacks the systems for all information on the Collectors and Shepard. Liara agrees and tries to warn the man (with flared biotics) that the risk of giving Shepard's body could be immense if used to help the Reapers; the Shadow Broker counters her by asking what use they could have with a corpse. The asari approaches the Shadow Broker only to find that it is another proxy, a sophisticated machine, that he is communicating through.

Once Feron says he has the information needed, Liara destroys the entire room. Luckily not all hope is lost, as Feron found out that they've just arrived with Shepard's body at the North Portal. Liara excitedly wishes to go right then and there; Feron agrees but stops her, saying that it was about time he said whom he was really working for.

Retrieved from "https://masseffect.fandom.com/wiki/Mass_Effect:_Redemption_3?oldid=517428"
Community content is available under CC-BY-SA unless otherwise noted.