Start a Wiki
watch 03:17
Mass Effect 2 Full Trailer
Do you like this video? 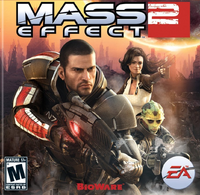 Mass Effect 2 is a science-fiction role-playing action game developed by BioWare for the Xbox 360, PC, and PlayStation 3.[1] It is the sequel to Mass Effect and the second game in the Mass Effect trilogy.

Mass Effect 2 was released on the dates, and at the recommended retail prices, indicated in the table below.

The following table details which items are available based on which version of the game is purchased, and whether or not the game was pre-ordered.

Electronic Arts Inc., Dr Pepper/Seven Up, Inc., and 7-Eleven, Inc. teamed up to offer Promotional Bonus Items through the 2010 Dr Pepper EA Games Every Bottle/Cup Wins Promotion when any specially marked Dr Pepper 20 oz. bottle with a yellow cap, or a 7-Eleven Big Gulp is purchased from 7-Eleven in the United States. The codes found under the cap of the bottles or from the label of a Big Gulp can be entered and redeemed at the Dr. Pepper website for downloadable content for Mass Effect 2 as well as other EA Games. Mass Effect 2 prizes are downloaded via the Cerberus Network and are available for both the PC and XBOX 360. At this time there are only three Mass Effect 2 Promotional Bonus Items which were made available through the promotion on January 28, 2010.

These Promo DLC items could previously all be obtained by following instructions on this page, and can now be downloaded freely from Origin.

The PC version of Mass Effect 2 was developed by Bioware and published by Electronic Arts. The game was released in India, Europe and North America on January 26, in Australia on January 28, and in New Zealand on January 29, 2010.

The PlayStation 3 version of Mass Effect 2 was developed by BioWare and published by Electronic Arts.[1] The PlayStation 3 version uses a variation of the game engine being developed for Mass Effect 3.[2][3] The game was released on January 18, 2011 in North and South America, on January 21, 2011 in Europe, and January 27 in Australia and New Zealand.[4]

The full version of the game is also available for download through the PlayStation Network. [5]

Copies of the PlayStation 3 version of Mass Effect 2 include the following:[6]

All other downloadable content for Mass Effect 2 was made available for PlayStation 3 owners to purchase. In addition, several "exclusive" free and paid DLC packs were released. These DLC packs contain Mass Effect 2 content that Xbox 360 and PC owners already have or had access to, but which PS3 owners are unable to obtain otherwise. These packs include:[6]

Since the original Mass Effect was not initially available on the PlayStation 3, Mass Effect: Genesis, a brief "interactive comic" which gives players the back-story of the Mass Effect universe and allow them to make choices which will affect their playthroughs of Mass Effect 2, was made available for download as part of the Cerberus Network.[7]

Following the release of the PlayStation 3 version of Mass Effect 2, numerous players reported that their save files were being corrupted.[8] This corruption forced a console restart and rendered all Mass Effect 2 save files unplayable.

Two years after Commander Shepard repelled invading Reapers bent on the destruction of organic life, a mysterious new enemy has emerged. On the fringes of known space, something is silently abducting entire human colonies. Now Shepard must work with Cerberus, a ruthless organization devoted to human survival at any cost, to stop the most terrifying threat mankind has ever faced.

To even attempt this perilous mission, Shepard must assemble the galaxy's most elite team and command the most powerful ship ever built. Even then, they say it would be suicide. Commander Shepard intends to prove them wrong.

In Mass Effect 2 the player has the opportunity to build a team of up to twelve characters at any one time. Possible companions include:

Shepard's success greatly depends on gaining the loyalty of these recruits. Loyalty of crew members is gained by completing their missions.

The following old characters may appear at some point in Mass Effect 2, provided they survived the events of Mass Effect. None of them are recruitable as squadmates except for Liara T'Soni, who can be temporarily recruited through the Lair of the Shadow Broker DLC pack.

1If they survived Mass Effect

Commander Shepard and the team visit a wide variety of new locations in Mass Effect 2, including:

Locations returning from Mass Effect include:

Mass Effect 2 allows the player to import characters from any completed Mass Effect playthrough. This means that several decisions made by the player in Mass Effect will carry over, and have the potential to impact the story. Examples of events that particularly influence Mass Effect 2 include who was rescued on Virmire, the fate of the Council, and any romance interest.

If desired, the player will be able to choose a new appearance, or choose a new class.[12][13] Pre-service history and psychological profile cannot be changed. It does not seem possible to make minor changes to the previous appearance (e.g. change hairstyles). You must either take it exactly as it was before (though the visuals will be somewhat enhanced in the new game), or start from scratch with a new custom appearance. It should be noted that any facial scars from Mass Effect are not carried over; however, your character will receive brand-new scars at the beginning of Mass Effect 2.

If a player beats Mass Effect multiple times on a single Shepard, either by saving and re-loading or by starting a new game plus, each "victory" will be a separate Shepard that the player may import to Mass Effect 2. The player need not worry about over-writing one of the existing Shepards, and may review all the major specifications and decisions of a Shepard before choosing to import the file. 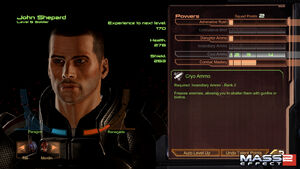 Mass Effect 2 features a significant number of changes and additions to weapons and abilities.

There are now six weapon classes:

Changes to core gameplay mechanics include:

Mass Effect 2 includes a variety of new talents, which are now called "Powers", including:

There are a number of changes to how powers work.

The new level cap is 30. Advancing from one level to the next requires a total of 1,000 experience points, and this remains constant from levels 1-30. Further advancing powers is no longer a simple point per power advancement system. Powers now cost an increasing number of points to advance and offer a specialization choice when maxed out. Since you can only max out five powers, this greatly affects play style of the characters. As such, it is now possible to reset your advancement and reset your character in-game. However, your main character can gain new powers throughout the game, and unique powers can be unlocked for team mates through game play.

Note: The Infinite Points Glitch will not work if you have downloaded any Xbox title updates after May 17, 2010. Christina Norman gave the reason for why this glitch was fixed. "The extra skill points glitch could worse[n] the play experience for players. Specifically, we can not guarantee the character import process will work properly for characters with extra skill points. These characters may fail to import, or their skill information may not import correctly." [15]

This glitch only works on Shepard; it does not affect squad members. First, you must acquire the tech lab by recruiting Mordin Solus from Omega, then finish the events at Horizon in order to unlock the retrain powers upgrade; you must have "Dominate" unlocked from a previous file or from choosing to save Morrinth on Samara's loyalty mission. Simply choose "Retrain Powers" to reset your squad points then choose "Advanced Combat Research" and select "Dominate." You will now have 1 free point invested in "Dominate." Simply Retrain Powers again, and repeat. This only works (as of 1.01) with "Dominate."

To get the Infinite Squad Points, you will need at least 4 available points and a power ready to be evolved to its 4th level. Go to the Squad Menu and instead of pressing A to evolve a power, press X + A. This evolves the power, while "undoing" points transfer at the same time, leaving you with having both results. Now, repeat. NOTE: to get maximized results, make sure you have 10 available points so you can repeat the whole thing over and over again in one single session without leveling up your character. This allows you to upgrade all skills. Should you make a mistake, first press B to cancel the evolution then press X calmly to remove the points you added and retry. Also it is possible to regain previously spent points with this method. For example, if you have a level 3 ability and 4 unused squad points, you can regain the points spent on the 3rd level skill and get 7 points in total. This happens randomly, or the exact method is yet to be revealed. 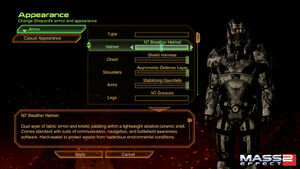 Changes to the inventory system include:

Instead of Intimidate and Charm skills, Shepard's ability to pick persuasive options in dialogue is determined directly by his or her Paragon or Renegade score.

Mass Effect 2 adds a large new feature to the dialogue system: Interrupts. The interrupt system will allow Shepard to take more physical action in a conversation, either through a Renegade hostile interrupt or a Paragon heroic interrupt.[10]

In the Galaxy Map, the Normandy is now visible at the cluster and system levels. The player navigates in the cluster and system views by manually flying the Normandy. Moving the Normandy between star systems in the cluster view burns fuel that must be replenished at fuel depots; if the Normandy runs out of fuel it is automatically moved to the nearest system with a depot (with a penalty deducted from the ship's resource stores). Area maps are now only available at hubs; on missions, the area map is replaced by an objective marker pointing to the mission objective. Exploring planets in the Mako is no longer available in Mass Effect 2; the player instead locates minerals and anomalies via the new Planet Scanning mini-game.

On June 14, 2010, BioWare released a free demo version of Mass Effect 2. The demo features the beginning missions of the game. The player can carry over saved progress from the demo into the full game once it is purchased. The demo is available for Xbox 360 and PC.[20][21]

The demo includes the missions Prologue: Save Joker, Prologue: Awakening, and Dossier: The Convict. After completing the second mission, the player is informed that if progress in the demo has been saved to a storage device, then that save data will be usable in the full game. The third mission will then begin, but no progress from that mission will be saved.

A Mass Effect 2 demo was released for download on PlayStation 3 on December 21, 2010 in North America, and December 22, 2010 in Europe.[22] This demo differs from the original demo in that the missions Freedom's Progress and Dossier: The Professor are included.[23]

The development team planned for much more extensive downloadable content than what was available in Mass Effect, and a large portion of the Mass Effect 2 team moved to DLC after the game's release[24]. Episodic combat, weapon and armor packs, characters, worlds, and full campaign expansions are available for download. [25]

However, it has been reported that the second series may have been cancelled [36][37] due to poor business performance by DC Direct. Furthermore, listing and pre-orders of Series 2 action figures has been removed from DC Direct's website.

In winter 2011, the figures from Series 1 and Series 2 both reappeared on the Bioware Store site, following the reveal that all previously announced figures would be released by Big Fish Toys [38]. As of January 2014, the figures are no longer present at the BioWare Store[39].

Retrieved from "https://masseffect.fandom.com/wiki/Mass_Effect_2?oldid=522464"
Community content is available under CC-BY-SA unless otherwise noted.