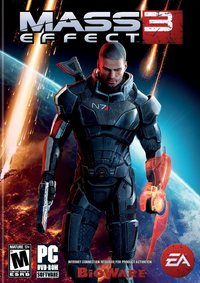 Mass Effect 3 is the sequel to Mass Effect and Mass Effect 2 developed by BioWare for the PC, PlayStation 3, and Xbox 360.[1] It is the final game in the Mass Effect trilogy.

Mass Effect 3 was released March 6, 2012 in North America, March 8, 2012 in Australia, Switzerland and Poland, and March 9, 2012 in Europe.[2][3] The game was originally slated for a 'Holiday 2011' release but was delayed to "[ensure] that it exceeds everyone's expectations"[4] and "address a far larger market opportunity."[5] Prior to that, Ray Muzyka had stated that the release timing would be based on maximising both "quality" and "commercial success".[6]

All PC versions of Mass Effect 3, physical or digital, will require EA's Origin software, and will not be available through Valve's Steam.[9]

Depending on where the game is purchased, what edition is purchased and whether or not it was pre-ordered, the customer may be entitled to one or more Retail Bonus Items.

The following table details which items are available based on which version of the game is purchased, and whether or not the game was pre-ordered.

The demo features a level on Earth during the beginning of the Reaper invasion, with David Anderson as a temporary squad member. The objective is surviving and making a rendezvous with the Normandy. The Demo then switches to a mission on Sur'Kesh where Commander Shepard, with Garrus and Liara, must save a fertile krogan female from a Cerberus attack.

EA sent copies of Mass Effect 3 into the stratosphere from six different cities around the world.[14] Copies of the game are called space editions and were accompanied by an exclusive prize.[14] They were attached to Weather Balloons with GPS trackers and were launched from New York, San Francisco, Las Vegas, Berlin, London, and Paris.[15] The balloons were trackable at the Official Mass Effect website. 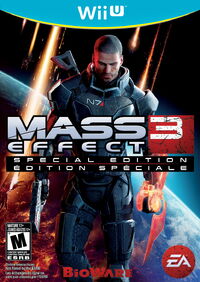 Copies of Mass Effect 3: Special Edition include the following:[16]

The game is playable using the Wii U GamePad or the Wii U Pro Controller.

Mass Effect 3 Special Edition for the Wii U includes optional touch screen functionality. The Wii U GamePad displays a map of the current area along with icons for elevators and stairs; turrets and drones; enemies and enemy grenades; objectives; and squadmates. It also displays names of NPCs in the map that otherwise would require players to physically approach them in order to resolve active missions. Using the touchscreen, it is possible to give tactical orders to the squad, such as changing their positions by dragging their icons on the touchscreen or using Powers mapped to the sides of the gamepad screen. Miiverse integration allows players to post messages online and take screen captures of the game in the middle of play.

On Multiplayer, the GamePad screen displays the general kill tally of all players in the game session. It also has a microphone button that allows players voice chatting through the Wii U's GamePad microphone. Miiverse integration is disabled in Multiplayer.

Off-TV play is available on both Singleplayer and Multiplayer. When on Multiplayer, the microphone button won't be displayed but players can tap on the touch screen just the same to chat with other players. Connecting the earphones to the Wii U GamePad will disable the game sounds on the TV speakers. All the game audio will directly stream into your earphones.

Earth is burning. Striking from beyond known space, a race of terrifying machines have begun their destruction of the human race. As Commander Shepard, an Alliance Marine, your only hope for saving mankind is to rally the civilizations of the galaxy and launch one final mission to take back the Earth.

Fate of the galaxy

The story is the "epic conclusion" to the story started in Mass Effect and continued in Mass Effect 2, as well as the conclusion of Commander Shepard's story.[24] The player's choices in the previous games were expected to have a much more significant impact on the plot than the choices in Mass Effect had on Mass Effect 2. As Mass Effect 3 is the end of the trilogy, the developers were not constrained by the necessity of allowing the story to diverge, yet also continue into the next chapter. This was to result in a story that diverges into wildly different conclusions based on the player's actions in the first two chapters.[25]

Throughout Mass Effect 3, Commander Shepard will be bringing the civilisations of the galaxy together as allies to take back Earth and repel the Reaper invasion. The player's choices throughout not only Mass Effect 3, but the entire trilogy, will affect the fate of these civilisations and the endings the player can receive.[26]

As with the previous games in the Mass Effect trilogy, Shepard is able to recruit companions that can follow the Commander into battle:

While some squad members are required, and core to the story, some are optional and others are only available for a single mission.[26] Project Director Casey Hudson has also stated that Mass Effect 3 has fewer squad members than Mass Effect 2, focusing on "deeper relationships and more interesting interplay".[27]
1 One or the other, depending on the outcome of Virmire: Assault in Mass Effect.
2 If survived Mass Effect 2.
3 Mass Effect 3: From Ashes DLC.

The following characters appear in some capacity in Mass Effect 3, provided they survived the events of Mass Effect and Mass Effect 2.

1 Temporary squadmate. 2 If survived in past Mass Effect games.

The following characters make their first game appearance after appearing in other Mass Effect media:

The following characters make their first appearance in the series:

Commander Shepard and the team visit a wide variety of new locations in Mass Effect 3, including:

Locations returning from previous games include:

The Normandy SR-2 returns in Mass Effect 3. It has been claimed by the Systems Alliance, which has taken the ship apart, studied it, and then rebuilt it with new technologies and new areas.

A player importing a save from Mass Effect 2 is able to change both their appearance and their class at the beginning of Mass Effect 3.

In a presentation by Lead Gameplay Designer Christina Norman, at the Game Developer's Conference in March 2010, titled Where Did My Inventory Go? Refining Gameplay in Mass Effect 2, Norman outlined her goals for Mass Effect 3.[32] These included richer RPG features, more combat options and more complex enemies.

According to Project Director Casey Hudson, Mass Effect 3 continues, with adjustments, the approach of Mass Effect 2 by focusing on "an awesome sense of exploration, intense combat, a deep and non-linear story that's affected by your actions, and rich customisation of your armour, weapons and appearance" instead of an approach where the player "(equips the) hero by sifting through an inventory of hundreds of miscellaneous items and spend hours fiddling with numerical statistics," noting the "overwhelmingly positive" response Mass Effect 2 received for its approach.[33]

Mass Effect 3's changes to Mass Effect 2's core combat mechanics are not as drastic as the changes Mass Effect 2 made to the original Mass Effect; however, improvements have been made and new capabilities introduced. These include:

Mass Effect 3 makes several changes to the way weapons worked in Mass Effect 2, these include:[26]

Mass Effect 3 features larger skill trees that offer a greater degree of freedom when it comes to choosing skills. The player has many more points to go around compared to previous games, allowing them to build up almost all of their powers to their maximum potential. To keep things from being linear however, powers at the 4th, 5th and 6th Rank gain one of two bonus effects, whereas Mass Effect 2 only offered a choice of two evolved versions of a power upon reaching the fourth and highest Rank.

Power Combos have a much more prominent role in Mass Effect 3, strongly encouraging the use of related powers back to back. Mass Effect 2 offered only a few combos such as the Warp detonation.

In addition to Powers returning from Mass Effect 2, there are several new additions to the lineup. These include:

The level cap in Mass Effect 3 is 60. If a character file is imported from Mass Effect 2, that character's level and abilities are retained, with the exception of any loyalty powers.[38]

While Cristina Norman has noted that "nobody liked" the mining mechanic in Mass Effect 2, Casey Hudson stated that the mining part of the game would be changed into the Search and Rescue mechanic, in order to preserve the notion of exploring the galaxy in a non-linear fashion.[26]

Mass Effect 3 for the Xbox 360 includes optional Kinect functionality. Kinect allows the player to choose dialogue options by reading the paraphrase aloud and give tactical orders to the squad, such as changing positions or using powers, with voice commands. The Kinect features do not not serve as an alternative control system, but "augment" in-game conversations.[40]

An official list of Kinect voice commands can be found here.[41]

Play styles are selected upon beginning a new game of Mass Effect 3 without importing a save file from a previous game. Elements of each play style, such as pre-selected dialogue or decreased combat difficulty can be selected independently via the options menu.

Mass Effect 3: Galaxy at War is a "bonus" to the Mass Effect 3 single-player campaign. In Galaxy at War, the player can manage and experience the galactic war on multiple fronts. The system monitors the "Galactic Readiness" level, which is measured by Commander Shepard's ability to utilize assets, such as people, weapons, resources, armies, and fleets, to confront the Reapers. Galactic Readiness is influenced in several ways, including co-op multiplayer and iOS games.[43]

Access to Galaxy at War and its components requires an Online Pass, which is included with new copies of Mass Effect 3 and also free to download.[44]

Mass Effect 3 features an online four-player cooperative mission mode separate from the single-player story. In this mode, players can create custom characters to fight on different fronts of the galactic war in the form of initially six different maps. Players can choose to play as human, turian, krogan, asari, drell, salarian, and quarian characters, each with their own unique abilities. Multiplayer characters gain experience through gameplay, allowing them to level up and unlock new powers. Players can also acquire weapons and upgrades.[43]

During development of the Mass Effect Legendary Edition remaster of the trilogy, BioWare confirmed that Mass Effect 3's multiplayer would not be included in the final version of the remaster.[46] As of the release in 2021, the multiplayer mode is not a part of the game.

All of the following DLC is included with Mass Effect Legendary Edition.