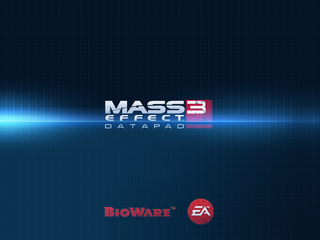 Mass Effect 3: Datapad was a free[1] app for iOS devices, released on March 12, 2012. Datapad allowed players to check the status of the galaxy map in Mass Effect 3 and receive messages from characters.[2] Datapad also contained a Codex, as well as a mini-game that interacts with the Mass Effect 3 Galaxy at War system.[3] Datapad is not compatible with Mass Effect 3: Special Edition for Wii U.[4]

As of June 6, 2013, Mass Effect: Datapad is no longer available through the App Store.[5] However, a browser-based version of the app can be accessed via Bioware's N7 HQ.

In the Mail section, the user could receive text messages from various characters from Mass Effect 3 as the player completed missions in the game. These messages were stored locally and could be received again after being deleted.

Media included a selection of screenshots and videos from Mass Effect 3. 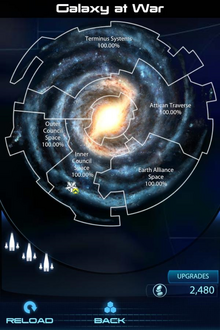 The Galaxy at War system of the app allowed the player to access a mini-game where they were able to monitor and increase their Galaxy Readiness Rating. Since June 6, 2013, this mini-game has been replaced by a simplified browser-based version of the game accessible via the N7 HQ. The app version of the mini-game featured a specific credit and evolution mechanism to improve the effectiveness of your fleet which have been removed in the new version.

In this version of the mini-game, users were then able to view their Galaxy at War Readiness Rating as well as deploy fleets to various locations in the galaxy for credits and an increase in Readiness for the associated theater. Once a fleet was deployed, the player had to wait out the duration of the mission (which could be shortened by your upgrades), after which the credits could be collected. The player also earned a Galactic Readiness bonus according to the level of his fleets. Depending on their shield level, there was a degree of probability that the fleets become unavailable for several times after the mission.

The missions took place in fifteen different locations distributed over five main theaters of operations. Each mission was of either short, medium or long duration; a specific reward was granted according to this level.

This missions characteristics and rewards were:

The evolution mechanism for your fleet was based on the credits the player earned that could be used to purchase various upgrades:

There are ten levels available for the Speed, Shielding and Readiness upgrades, and three levels of the Fleets upgrade, each level increasing the effect of the upgrade, but costing more.

Once all basic upgrades have been purchased, advanced and expensive upgrades became available:

There were three levels of Galactic Command Coordination available, the first level costing 10,000 credits, the second 25,000 and the third 40,000 credits.

The Codex section of the app included a portion of the Mass Effect 3 Codex.