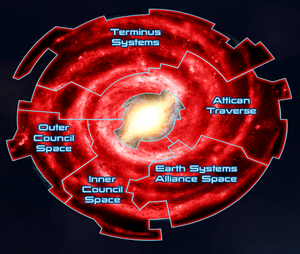 Mass Effect 3: Galaxy at War is an optional gameplay system in Mass Effect 3 that allows the player to manage Commander Shepard's resources in the galactic war against the Reapers. Galaxy at War directly affects the state of the war effort in single-player, and can determine how the final confrontation of Mass Effect 3 plays out.[1][2] Access to Galaxy at War requires an Online Pass which is included in new copies of Mass Effect 3 or available for free download.[3]

Mass Effect 3: Galaxy at War provides a strategic outline of the state of the galaxy in the midst of the war against the Reapers. A color-coded map displays the player's progress in the conflict. The goal of Galaxy at War is to prepare the galaxy for a counterattack to defeat the Reapers; the level of preparation will determine the outcome of that battle. Using Galaxy at War is optional and the same outcomes can be achieved by playing only the single-player.[1][4]

War Assets are the resources of the galactic war effort. They include armies, fleets, and vital supplies that can improve the chances of Allied forces against the Reapers. Players can acquire different War Assets while playing Mass Effect 3 or Galaxy at War interfaces.[4]

There are multiple ways to interact with Galaxy at War that will affect the Galactic Readiness rating. Aside from cooperative multiplayer, additional interfaces on iOS and Facebook were planned, each with their own "hooks".[4]

Mass Effect 3's cooperative multiplayer mode ties directly into Galaxy at War. Success in co-op rewards players with an increased Galactic Readiness rating. Typically, if a specific map is chosen, 8-9% readiness is added to the galactic region that map is located in, while if "Unknown Location" is chosen, 3-4% readiness is added overall. If a multiplayer mission fails in the second half of the match (after Wave 5), 2% readiness will be rewarded.

Note: Due to an unknown bug, it is possible to reach a fourth level of this asset instead of the maximum of three. The War Asset value is then 160 instead of 120. The origin of this bug seems to be multiple and unknown.

Mass Effect: Datapad was an app for iOS devices that linked to Mass Effect 3. It allowed players to monitor the Galaxy at War system and deploy fleets throughout the galaxy for an increase to the Galactic Readiness rating and receive messages from Mass Effect 3 characters.

On June 6, 2013, Mass Effect: Datapad was removed from the App Store.[5] It was replaced by BioWare's N7 HQ, which assumed most of Datapad's functions, including the Codex and Galaxy at War mini-game.

N7 HQ is a BioWare website that was originally launched to allow Mass Effect 3 players to track their progress and unlocks in the game's multiplayer mode. On June 6, 2013, N7 HQ was modified to include the Codex and Galaxy at War mini-game from the Mass Effect 3: Datapad app.