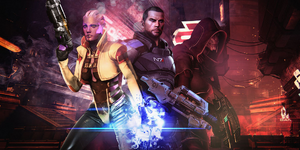 Omega has been seized by one of Cerberus' most accomplished and brilliant agents, General Oleg Petrovsky... and Aria T'Loak is plotting her revenge. To reclaim her domain, she must team up with Commander Shepard.

Join Omega's infamous leader in her fight to retake the notorious black market station. Navigate Omega's seedy underbelly as Aria joins your squad and you witness her legendary biotic powers and unrelenting ruthlessness first-hand. Help Nyreen Kandros, the valiant turian leader of the Talon mercenary group, as she fights to free the enslaved people of Omega. Face down fearsome new enemies, including the Cerberus-manipulated Reaper, the Adjutant.