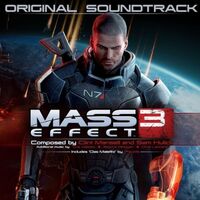 Mass Effect and Mass Effect 2 Composer Jack Wall did not return for Mass Effect 3, however several tracks from the previous games do return, though they are not included on the soundtrack.

The soundtrack was initially available only through purchase of the Mass Effect 3 N7 Collector's Edition or Digital Deluxe Edition, though it became available on the iTunes store on April 24, 2012 at a cost of US$6.99.[1]

“
With Mass Effect 3, we're taking players on a more personal journey, even though the scope is bigger than ever - an all-out galactic war! Each composer has played an intricate role in delivering the combination of epic scope and delicate emotion that will make Mass Effect 3 the best game in the series.

Starting in July of 2012, BioWare began releasing additional videogame scores for Mass Effect 3. These albums include tracks that were not included in the Mass Effect 3 Original Videogame Score. 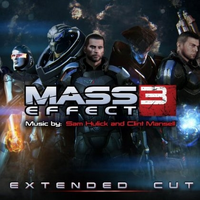 The soundtrack for Mass Effect 3: Leviathan was composed by Sascha Dikiciyan and Cris Velasco [3]. A single 'Unreleased' track from the DLC was made available for free on the Mass Effect website on September 1, 2012.[4] 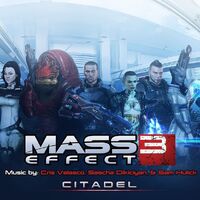 Retrieved from "https://masseffect.fandom.com/wiki/Mass_Effect_3_Soundtracks?oldid=482221"
Community content is available under CC-BY-SA unless otherwise noted.